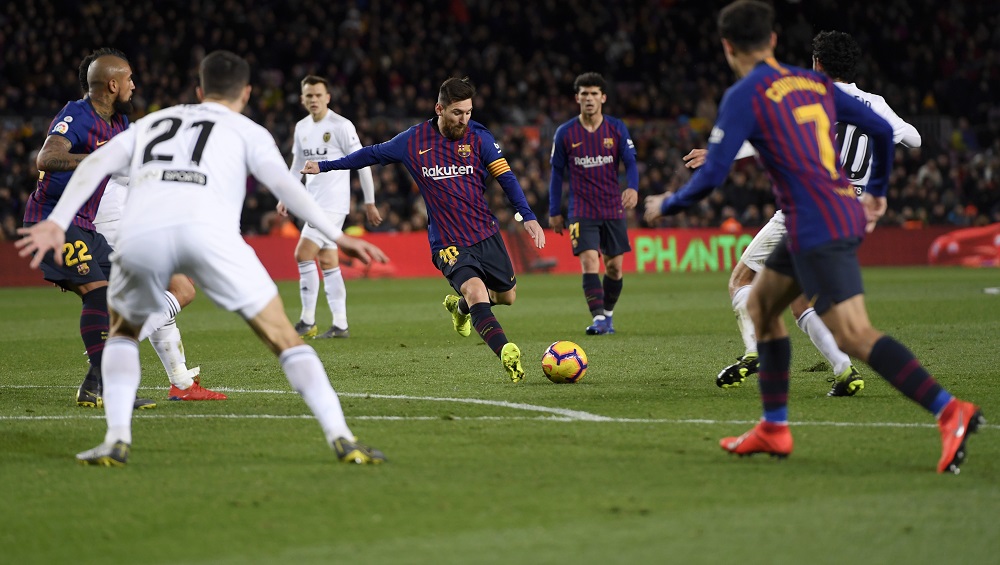 Barcelona have a tough assignment away against Valencia in the Spanish La Liga where a win should keep them at the top of the table. The Catalonians are level on points with arch-rivals Real Madrid, and it is only goal difference that separates the two at the moment. Under new manager Quique Setien, Barcelona have won their last two matches, but the fans are yet to see their team hit top gear. With the tiki-taka based football returning to Camp Nou, expectations will rise exponentially. Opponents Valencia are 7th in the league standings with 31 points. They can be unpredictable at home, which will keep Barcelona on their toes. Valencia Vs Barcelona Live Football Score.

Goncalo Guedes and Manu Vallejo are injured and will not take part in the clash against Barcelona. The absence of these two key players will have an impact on Valencia's performance, although manager Albert Celades will hope otherwise. Skipper Dani Parejo is suspended, which makes matters worse for the hosts. Kevin Gameiro in the final third, has a lot weighing on his shoulders with the absence of big names. Rodrigo Moreno, who has been linked with Barcelona recently will be hoping to make an impression against his potential suitors.

The absence of Luis Suarez is a huge problem for Barcelona, but one Quique Setien will have to deal with for months to come. Lionel Messi was rested for the Copa Del Rey tie, and the legendary forward needs to be at his best for the Catalonians to thrive. Antoine Grieezmann scored the winner for Barcelona against Ibiza and will go into the game full of confidence. At the back, the calmness of Gerard Pique should come in handy for the league leaders. VAL vs BAR Dream11 Prediction in La Liga 2019–20: Tips to Pick Best Team for Valencia vs Barcelona, La Liga Football Match.

Valencia vs Barcelona, La Liga 2019-20 football match is scheduled to take place on January 25 (Saturday). The match will kick off at 08:30 pm IST (Indian Standard Time) and will be held in Mestalla.

How to Watch Live Telecast of Valencia vs Barcelona, La Liga 2019-20 Football Match?

Sadly, Valencia vs Barcelona live telecast will not be available on any channels in India as there is no official broadcaster for Spanish La Liga 2019-20. Sony Pictures Sports Network (SPN) did telecast previous season in India.

Where to Get Free Live Streaming Online of Valencia vs Barcelona, La Liga 2019-20 Football Match?

Despite the unavailability of the official broadcaster of Spanish La Liga in India (which means no Hot Star or Sony Liv app), one can still catch Valencia vs Barcelona match online via live streaming on La Liga's official Facebook page. You can also follow LatestLY for live football score updates. Tough game for both the team but expect Barcelona to find a way to win this clash.