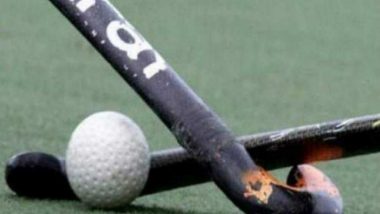 New Delhi, Aug 30: The Hockey India domestic season is scheduled to resume in October after the pandemic halted the national calendar in March due to the second wave. Hockey India has given instructions to host state member units and participating teams to take strict precautions and enforce all the Covid protocols established by the Ministry of Home Affairs (MHA) and respective state governments, as well as Hockey India's guidelines to host domestic events.

The season will recommence with the first Hockey India Sub-junior Men Academy National Championship 2021 in Bhopal from October 4-13. The first Hockey India Junior Men Academy National Championships 2021 will also be held in Bhopal from October 18-27. FIH Player of the Year Nomination Will Give Me Extra Motivation to Do Even Better: Gurjit Kaur.

Hockey India president Gyanendro Ningombam said, "There is a lot of euphoria following the success of Indian men and women's hockey teams at the Tokyo Olympics and we wanted to ensure this excitement translates into the playing field. With this intent, we announce the resumption of the Hockey India domestic calendar. We had to halt abruptly in March this year due to the rise in cases across the country but with things looking up on the Covid front, we felt it is safe to resume under Covid guidelines. Sumit Antil & Sandeep Chaudhary at Tokyo Paralympics 2020, Athletics Live Streaming Online: Know TV Channel & Telecast Details for Men's Javelin Throw F64 Final Event.

"Hockey India has instructed its state member units who are hosting these tournaments as well as participating teams to follow all the Covid protocols and ensure a safe environment for the athletes to perform. I wish all the participating teams the very best in their preparations for the upcoming Championships," Ningombam added.

(The above story first appeared on LatestLY on Aug 30, 2021 04:50 PM IST. For more news and updates on politics, world, sports, entertainment and lifestyle, log on to our website latestly.com).