Kobe Bryant 2000 NBA Finals Uniform, Handprints From Grauman’s Chinese Theater and Other Memorabilia Up for Auction

Julien's Auctions said Thursday that the items from Bryant, who was killed last month in a helicopter crash at age 41 along his his daughter Gianna and seven others, would be included in a sale of more than 300 sports items on April 30. 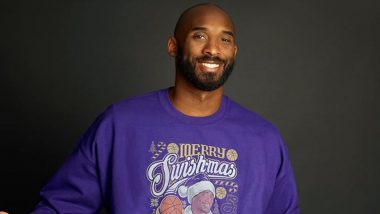 Los Angeles, February 27: Kobe Bryant's uniform worn in the 2000 NBA Finals and his handprints from Grauman's Chinese Theater in Hollywood are among the personal memorabilia set to be put up for sale in April.

Julien's Auctions said Thursday that the items from Bryant, who was killed last month in a helicopter crash at age 41 along his his daughter Gianna and seven others, would be included in a sale of more than 300 sports items on April 30. When Kobe Bryant Died, a Piece of Me Died, Says NBA Champion Michael Jordan.

Bryant was a five-time NBA champion and 18-time NBA All-Star with the Los Angeles Lakers. He retired in 2016 and his jersey numbers, 8 and 24, were retired by the Lakers in 2017.

The Lakers number 8 home uniform worn by Bryant in the 2000 NBA Finals, when he captured his first NBA crown by leading the Lakers over the Indiana Pacers, carries an estimated price tag between $10,000 and $20,000. It includes a black armband worn in memory of Lakers legend Wilt Chamberlain.

The 2011 handprints Bryant made at Grauman's, valued between $4,000 and $6,000, made him the first athlete to make a cast at the Hollywood movie theater in a collection usually reserved for cinematic sensations.

Bryant's number 24 home jersey worn in the 2006-07 NBA season, an autographed pair of black and white shoes worn by Bryant and a basketball signed by the 2009-10 NBA champion Lakers, including Bryant, is also available.

"We are honored to include this collection of his items and pay tribute to this giant who was an inspiration not only to basketball fans but to the entire world," said Darren Julien, president of chief executive of Julien's Auctions. Kobe Bryant's Memorial Service: Wife Vanessa Bryant's Emotional Speech and Friend Shaquille O’Neal’s NSFW Quote Were Among The Memorable Moments (Watch Videos).

Other sports items available include a 1984 Los Angeles Olympics silver medal, a replica FIFA World Cup trophy given to Marco Antonio from the 1970 champions Brazil and FIFA World Cup champion's gold medals from 1994 and 2002.

(The above story first appeared on LatestLY on Feb 28, 2020 12:02 AM IST. For more news and updates on politics, world, sports, entertainment and lifestyle, log on to our website latestly.com).