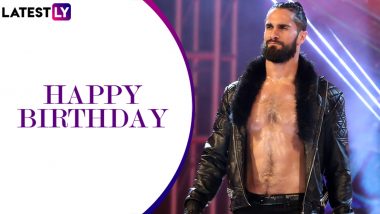 Colby Lopez, better known as Seth Rollins on WWE, turns 34 years old on May 28, 2020. Rollins currently wrestles under Raw Brand under the character of Monday Night Messiah. Prior to signing with WWE, Lopez wrestled under the ring name Tyler Black for Ring of Honor (ROH) and was part of the Age of the Fall stable with Jimmy Jacobs. On the occasion of Seth Rollins' birthday, let us take a look at his biggest wins in WWE. WWE Raw May 25, 2020 Results and Highlights: Apollo Crews Defeat Andrade to Become United States Champion; Drew McIntyre Gets Into Brawl With Bobby Lashley (View Pics)

Colby Lopez was born on May 28, 1986, in Buffalo, Iowa. He is of Armenian, German, and Irish descent. The BeastSlayer, another sobriquet of Seth Rollins, made his debut at the Survivor Series 2012 alongside Dean Ambrose and Roman Reigns, as a part of the faction known as The Shield. He is the only wrestler to have held all three of WWE's main brand world titles. He held WWE Universal title until WWE Crown Jewel 2019 where he lost his belt to Bray Wyatt in 'Falls Count Anywhere' match. The Monday Night Messiah last held Raw Tag Team title with Buddy Murphy, which they lost to The Street Profits on March 2, 2020. Seth Rollins Workout And Diet.

This was an unsanctioned street fight where even Stephanie McMahon interfered. During the match, Triple H targetted Rollins’ injured knee by applying Figure Four Leglock, hitting it with a chair and even stomping on the knee by putting it between the chair. The BeastSlayer Rollins had the last laugh as he delivered Triple H's own signature move pedigree to seal the victory.

This was the first time a Money in the Bank was cashed in during the main event title match. Initially, Lesnar and Reigns had a match for World Heavyweight title. However, Seth Rollins entered during the match at the perfect time when Lesnar was down. The BeastSlayer pinned The Big Dog by hitting him with a curb stomp to register a big win.

4. Seth Rollins vs The Miz vs Finn Balor, WrestleMania 34

This was indeed one of the best matches of Seth Rollins' career, as he fought this match with injury. The BeastSlayer won this match to again become WWE Universal Champion.

Seth Rollins will have more reasons to smile on this birthday as just a few days back his fiance Becky Lynch confirmed her pregnancy. This is indeed the happiest moment of Rollins' life as he looks forward to becoming a father to Becky's child. Also, The Monday Night Messiah will have the honour to conduct the retirement ceremony of Rey Mysterio in the upcoming episode of Raw on June 1, 2020. We wish Seth Rollins a very Happy Birthday, and hope he has a healthy and prosperous life ahead.

(The above story first appeared on LatestLY on May 28, 2020 08:45 AM IST. For more news and updates on politics, world, sports, entertainment and lifestyle, log on to our website latestly.com).