Rafael Nadal admitted to his behavioral mistakes against Lorenzo Sonego in the third round match at Wimbledon 2022. The Spaniard has apologized to the Italian star after the latter accused Nadal for poor sportsmanship. 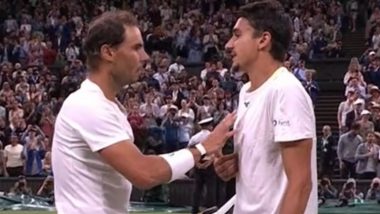 Rafael Nadal has admitted his behavioral mistakes and apologized to Lorenzo Sonego after both players were engaged in an action-packed  third-round game at Wimbledon 2022 on Saturday. Nadal stormed past Sonego 6-1, 6-2, 6-4 to register his berth in the last 16 of the Championships. But this match is in the limelight because of the two player's exchange, especially the Spanish tennis star's behavior in the court during the match.  Wimbledon 2022: Rafael Nadal Beats Lorenzo Sonego, to Breeze Into Fourth Round

During the match, the 22-time Grand Slams winner called Sonego to the net to confront him about the Italian's screaming. Nadal did this to create a pressure on his young opponent. Even, in the middle of the play, Nadal told the 27-year-old Italian to stop faking his screaming.

Here is what happened at the net after the final point of the Rafa Nadal-Lorenzo Sonego match. Testosterone overload? Part 2 of 2. #Wimbledon #CentreCourt100 pic.twitter.com/5RDcCwcBG4

However, Sonego has expressed his unhappiness after the match and said that he did not expect this type of behavior from a legend like Rafael Nadal. The Italian has also accused the Spaniard for 'poor sportsmanship.'

During the post-match press conference, Sonego said: “A player should not call his opponent on the net. You cannot do that at Wimbledon. Nadal should have just had a word with the umpire. He distracted me."

However, Nadal was very quick to react to this accusations and admitted that he was wrong. The Spaniard has also stated he wants to apologize to Sonego for his behavior, explaining that he did not think his words were offensive.  Wimbledon 2022: Nick Kyrgios Knocks Out Fourth Seed Stefanos Tsitsipas, to Enter Round of 16

After the end of the game, Nadal was seen talking to the match judge about the match. He informed the judge that he had no negative intention in his conversation with Sonego  to win the game. The Spaniard said, "I didn’t make it in a negative way. I did it nice."

“I didn’t make it in a negative way. I did it nice”

"I think I was wrong," Nadal later told the Press. "I spoke to him in total calmness. I exposed the situation that was happening. If I needed to go back, I wouldn't do it again," he continued.

"I told the referee before. The referee, who is one of the bests, was waiting until the change of service to tell him something. Were are among colleagues, we see each other every week. There are codes inside a tennis court that must be respected. I believe I was wrong for calling him to the net and telling him the things. I should've told him when we switched (serves) or wait until the referee told him," Nada concluded.

Rafael Nadal will face  Botic van de Zandschulp in the round of 16 of Wimble 2022 on July 4 in a bid to edge closer to another major career title.

(The above story first appeared on LatestLY on Jul 03, 2022 12:22 PM IST. For more news and updates on politics, world, sports, entertainment and lifestyle, log on to our website latestly.com).