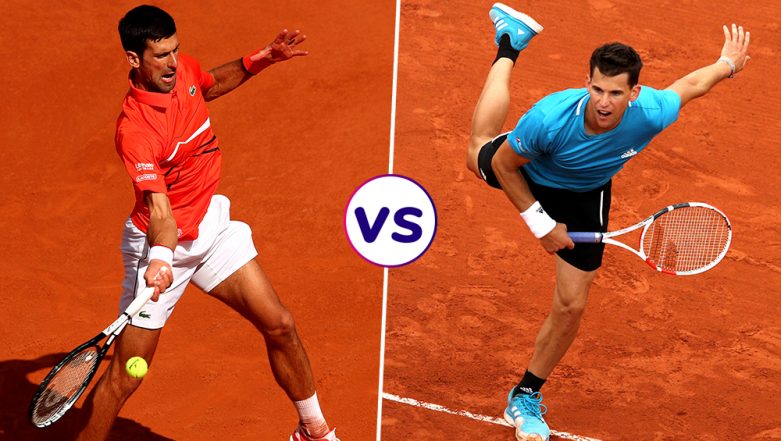 Novak Djokovic will face the 2018 French Open runner-up Dominic Thiem in the semi-final of Roland Garros 2019. The Serbian will take on Thiem and will look to seal a spot in the final of the French Open 2019. The World No 1 and top seeded Novak Djokovic is chasing his second Grand Slam at Roland Garros and is also pursuing the calendar slam or 'Novak Slam' after having won the Wimbledon trophy in 2018, US Open 2018 and Australian Open 2019. Thiem, on the other hand, will try and stop Djokovic's march and make it to the finals to face either Rafael Nadal and Roger Federer for the Championship. If you are looking for live telecast and free streaming online details of Novak Djokovic vs Dominic Thiem match in the semi-final of French Open 2019, you will find it all here. Also get information on match timings in IST (Indian time) and TV channels doing the live coverage of the game. Novak Djokovic Birthday: ‘Djoker’ Turns 32, Video Proves Why the Serbian Tennis Great Is King of Hearts.

The 32-year-old Novak Djokovic has won 15 Grand Slam titles so far and is number three on the list of players with most number of Grand Slams in Men's Singles tennis. The Serbian great is only behind Rafael Nadal (17) and Roger Federer (20) for most number of Grand Slams titles and experts are of the opinion that if anybody can dethrone Federer, it is Novak as he has age on his side. But Djokovic will first have to fend off the challenge by the World No 4 and Austrian Dominic Thiem on Friday. Novak Djokovic's Interview as a 7-Year-Old Proves He is a True Champion, Watch Video Where He Says, 'Tennis is a Duty for Me'.

The Novak Djokovic vs Dominic Thiem match is scheduled to begin at 6.20 PM (Indian Standard Time). The match will be played at the Philippe-Chatrier Court.

The Novak Djokovic vs Dominic Thiem match can also be viewed online. Video streaming platform Hotstar will play the live streaming of the match. Fans can watch the full match on Hotstar.

Djokovic will have to be wary of the 25-year-old Thiem, who has defeated the Serbian on clay twice, including the 2017 Roland Garros quarter-final victory over Djokovic. Thiem is chasing his first Grand Slam and looks hungry. However, Djokovic leads Dominic Thiem 6-2 in terms of career battles and head to head record. The 2019 French Open is the first grand slam since 2012 where Roger Federer, Rafael Nadal and Novak Djokovic- the big three, have made it to the semi-finals of a Grand Slam.