We just witnessed an enthralling episode of WWE NXT which was packed with high voltage drama and action. The week started with Raw where we were shocked to see Randy Orton turn on his mentor Ric Flair. Now fans will look forward to SmackDown which promises to be an amazing episode. 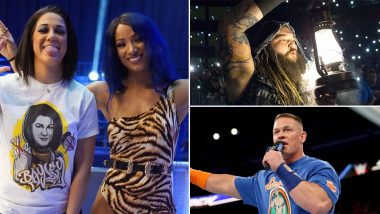 We just witnessed an enthralling episode of WWE NXT which was packed with high voltage drama and action. The week started with Raw where we were shocked to see Randy Orton turn on his mentor Ric Flair. Now fans will look forward to SmackDown which promises to be an amazing episode that will feature a triple brand Women's Battle Royal match to determine the number one contender to face Bayley for Women's Championship at SummerSlam 2020. Meanwhile, we will update you with WWE news that includes John Cena praising Bray Wyatt's performance to Bayley bonding with Sasha Banks. WWE NXT Aug 12, 2020 Results and Highlights: Keith Lee Hit With Fireball Post Signing Contract For World Title Match Against Karrion Kross at TakeOver XXX; The Velveteen Dream Returns.

John Cena recently in his interview with Justin Barrasso of Sports Illustrated praised Bray Wyatt for his performance amid coronavirus pandemic where the shows are taking place without fans in the arena. Cena said that Bray is doing a great job and has adapted well in crowd less environment. Cena event went on to praise Seth Rollins where he said that Monday Night Messiah is doing remarkable work in WWE during this time. WWE News: CM Punk’s Advice to Rey Mysterio for Revenge on Seth Rollins, Details About Retribution and Other Interesting Updates You Need to Know.

Former WWE referee Mike Chioda reffed the recently-concluded AEW TNT Championship match between Cody and Scorpio Sky. Cody retained the title against Sky after hitting Cross Rhodes for the pinfall win. Chioda was released by WWE in April as part of the COVID-19 budget cut plan.

The legendary referee Mike Chioda will be calling the action!

SmackDown Women's Champion Bayley recently spoke on the Silver City Podcast. The Role Model shared her early days experience in WWE and how the four horsewomen of NXT - Bayley, Sasha Banks, Becky Lynch and Charlotte Flair bonded during their time in developmental. However, Bayley revealed that initially, she was a bit jealous of Sasha Banks as The Legit Boss got the chance first to feature in main event shows. Bayley then went on to say that currently there is a friendly rivalry between her and Banks.

Retribution has been invading over Raw and SmackDown since the past two weeks and fans are pretty much showing good interest to this black-masked faction. Wrestling journalist Tom Colohue had stated that one of the members in the group is NXT Superstar Vanessa Bourne. A fan on Twitter also tweeted that one of the members resembled Vanessa Bourne and even had curly hair just like her. WWE Raw Aug 10, 2020 Results and Highlights: Randy Orton Hits Ric Flair With Punt Kick, Seth Rollins Assaults Dominik Mysterio After The Contract Signing For Their Match at SummerSlam 2020.

5. Ric Flair Not Happy With WWE

Wrestling journalist Tom Colohue in his recent YouTube video revealed that Ric Flair is unhappy with WWE as he was supposed to be a part of SummerSlam 2020. The Nature Boy was supposed to accompany Randy Orton in his title match against Drew McIntyre at SummerSlam 2020. However, WWE in the very last moment writes him off this past week on Raw where he was attacked by Randy Orton. Ric Flair's promo at this past week Raw was mostly unscripted as it was a last-minute call.

(The above story first appeared on LatestLY on Aug 14, 2020 09:01 AM IST. For more news and updates on politics, world, sports, entertainment and lifestyle, log on to our website latestly.com).