Google which took a dig at Apple for removing the 3.5 mm headphone jack has now announced to ditch the jack in its new device -- Pixel 6a. 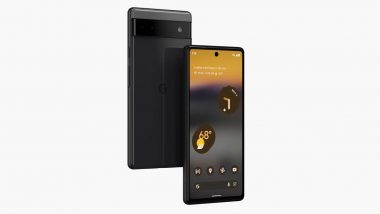 Google Pixel 6a (Photo Credits: Made By Google)

San Francisco: Google which took a dig at Apple for removing the 3.5 mm headphone jack has now announced to ditch the jack in its new device -- Pixel 6a. Google even created a two-minute ad celebrating the headphone jack in the Pixel 5A that parodied Apple's elaborate design videos. Google Pixel 6a With Tensor SoC, Dual Cameras Launched; Check Price & Other Details Here.

That video was titled, in part, "The Circle Comes Full Circle". Google announced new Pixel 6a during its I/O 2022 developer conference. Nearly all smartphone manufacturers have moved on from the headphone jack which is a trend largely kicked off by Apple with the iPhone 7 in 2016.

"Built-in sensors will measure the pressure in your ear canal to make sure you're comfortable even during long listening sessions," said the company.

Google is the latest tech company to abandon the headphone port in its next smartphone. The company may wish to make a more convincing case to sell users wireless headphones, as it revealed new Pixel Buds Pro at its event that can be pre-ordered for $199 in select countries from July 21. The wireless earbuds comes with Active Noise Cancellation (ANC) with a custom 6-core audio chip that runs Google-developed algorithms and custom speakers. Later this year, Pixel Buds Pro will also support spatial audio.

(The above story first appeared on LatestLY on May 13, 2022 09:25 AM IST. For more news and updates on politics, world, sports, entertainment and lifestyle, log on to our website latestly.com).