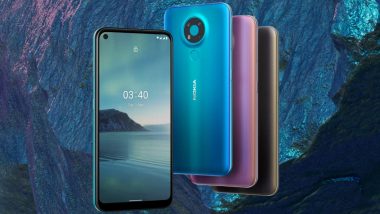 HMD Global, Nokia Mobile licensee on Wednesday officially launched Nokia 3.4 and Nokia 2.4 smartphones in Europe. Both the phones come with HD+ display but the Nokia 3.4 sports a hole-punch display design while the Nokia 2.4 gets a waterdrop notch display. Another difference between the two is that the former packs a triple rear camera while the latter comes equipped with dual rear cameras. Apart from the phones, the company also announced the global availability of the Nokia 8.3 5G handset, starting today onwards. However, we won't be seeing the phone in our market any time soon. Nokia Smartphones Become Expensive in India Due To GST Hike; Checkout New Prices.

As far as the prices are concerned, the Nokia 3.4 handset gets a starting price of EUR 159 which is approximately Rs 13,700. On the other hand, the price of the Nokia 2.4 starts at EUR 119 which is around Rs 10,300. The handsets are likely to go on sale in the European markets by next month onwards. Both the phones will be offered in three shades - Charcoal, Dusk, and Fjord colour options. It is important to note that the company hasn't announced any launch details of Nokia 3.4 and Nokia 2.4 in India.

Talking about the Nokia 3.4, the smartphone sports a 6.39-inch HD+ display with a resolution of 720x1,560 pixels and an aspect ratio of 19.5:9. Under the hood, there is an octa-core Qualcomm Snapdragon 460 SoC, mated up to 4GB of RAM and up to 64GB of internal storage. For photos, there is a 13MP triple rear camera module assisted by a 5MP ultra-wide-lens and a 2MP depth sensor. At the front, the phone packs an 8MP snapper for selfies and video calling. It comes fuelled by a 4000 mAh battery with standard 10W charging technology.

Presenting Nokia 2.4. The gadget that prepares you for every mission.

On the other hand, the Nokia 2.4 smartphone gets a slightly bigger 6.5-inch HD+ display with 20:9 aspect ratio and 720x1,600 pixels of resolution. Unlike the Nokia 3.4, the phone is powered by a MediaTek Helio P22 SoC. The processor comes paired with up to 3GB of RAM and up to 64GB of onboard storage. It gets a dual rear camera setup comprising of a 13MP primary sensor with an f/2.2 aperture assisted by a 2MP depth sensor. Upfront, there is a 5MP selfie camera with f/2.4 lens. It packs a 4,500mAh battery.

(The above story first appeared on LatestLY on Sep 22, 2020 11:39 PM IST. For more news and updates on politics, world, sports, entertainment and lifestyle, log on to our website latestly.com).