Nothing OS Now Available for All Devices With Android 11 & Higher

London-based consumer tech brand Nothing on Monday announced that its Nothing Launcher (Beta) operating system is now available for all devices with Android 11 and higher. 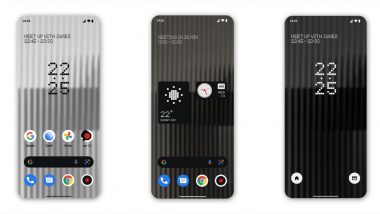 Nothing OS (Photo Credits: Nothing)

New Delhi: London-based consumer tech brand Nothing on Monday announced that its Nothing Launcher (Beta) operating system is now available for all devices with Android 11 and higher. The company said that the Launcher app icon is now available on the home screen and a new. How to Set Up' page when you open Launcher for the first time has been added. Nothing Phone 1 Specifications Leaked Online, Launch Expected Soon.

"For easy access, the Dropbox link to download bonus wallpapers and ringtones now sits in Launcher settings," said the company.

In March, Nothing CEO and Co-founder Carl Pei confirmed plans to launch Nothing phone (1), its first smartphone. Nothing OS offers a new experience for Android. Nothing Launcher (Beta) was earlier compatible with Samsung S21 and S22, Google Pixel 5 and 6.

The company's first smartphone -- Nothing phone (1) -- will be powered by Qualcomm's Snapdragon mobile platform. It will be the company's first smartphone and a second device in the overall product ecosystem of the brand. The company said it is planning to launch the smartphone later this year. It added that Nothing OS captures the best features of pure Android and is designed to deliver a fast, smooth and personal experience.

(The above story first appeared on LatestLY on May 10, 2022 09:30 AM IST. For more news and updates on politics, world, sports, entertainment and lifestyle, log on to our website latestly.com).

Comments
Tags:
Android 11 Carl Pei Nothing Nothing OS Nothing Phone 1 Samsung S21 Samsung S22 Snapdragon
Comments
You might also like