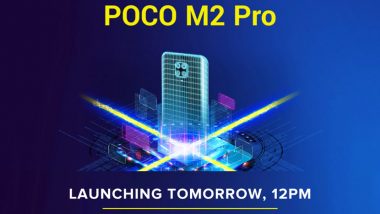 Poco, the former Sub-brand of Xiaomi is all set to launch the Poco M2 Pro smartphone in the Indian market tomorrow. The company confirmed the launch date of its smartphone last week and has been teasing about the mobile phone from the past couple of days on its official Twitter handle. The mobile will be made available on Flipkart. Poco M2 Pro Smartphone to Be Launched in India on July 7 via Flipkart, Check Teaser.

According to the posters revealed by the firm, Poco M2 Pro will sport a quad rear camera setup that looks similar to devices such as Redmi Note 9 & Redmi 10X. The camera module could comprise of a 48MP main camera, other three camera lenses are unknown. The mobile phone is expected to come packed with a large battery, the company has confirmed that the smartphone will get 33W fast charging support.

Less than 24 hours to go for the unveiling of the #POCOM2Pro & we are feeling the surge. Are you ready to #FeelTheSurge?

RT to let everyone know. pic.twitter.com/ijZBFXSpuI

Also, the leaked geek bench listing of Poco M2 Pro revealed it will be powered by Qualcomm Snapdragon 730G chipset as we see on Poco X2 smartphone. More specifications of the handset will be revealed during its launch event. As far as the price is concerned, the Poco M2 Pro is expected to be a sub Rs 30,000 or an affordable handset under Rs 15,000.

(The above story first appeared on LatestLY on Jul 06, 2020 02:44 PM IST. For more news and updates on politics, world, sports, entertainment and lifestyle, log on to our website latestly.com).