Smartphone brand realme on Tuesday unveiled industry-leading 108MP camera with trendsetting features that will arrive in the upcoming realme 8 series. In realme 8 Pro's camera, 3x mode activates a new ‘In-sensor Zoom' which will only use the 12MP sensor mapped with the zoomed part to generate an image. 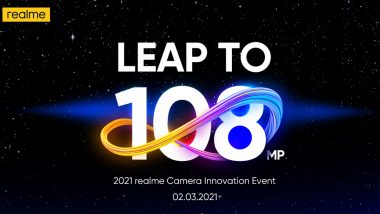 "The 108MP photo taken by realme 8 Pro has a well-balanced overall exposure with vivid colours and sharp details in both bright and dark areas. The details stay sharp even after zooming in," the company informed during a virtual briefing at its ‘Camera Innovation Event'. "Developing starry time-lapse video is challenging as it requires much-needed performance to handle the synthesis of the photos," said the company.

Give a new look to your Portrait shots with these new filters of the #realme8Pro:

In realme 8 Pro's camera, 3x mode activates a new ‘In-sensor Zoom' which will only use the 12MP sensor mapped with the zoomed part to generate an image. The imaging process is faster because of the smaller size on the 12MP photo, enabling realme 8 Pro to take eight 12MP photos in a row and then input them into the clarity enhancement algorithm to further increase the image clarity, the company informed.

After processing, a 3x photo from realme 8 Pro can be even better than some of the optical telephoto lenses in terms of sharpness. The company has also launched the world's first Starry Time-lapse Video on its smartphone. Realme has come up with an exclusive time-lapse video algorithm based on starry photos. With the new tilt-shift photography algorithm, the realme 8 series would be able to capture tilt-shift photos as well as 10 times faster tilt-shift time-lapse videos.

(The above story first appeared on LatestLY on Mar 02, 2021 04:59 PM IST. For more news and updates on politics, world, sports, entertainment and lifestyle, log on to our website latestly.com).