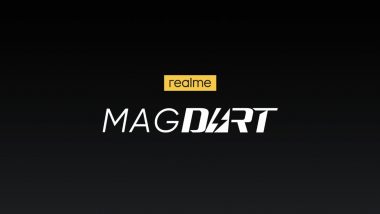 realme aims to be a pioneer in the magnetic wireless charging ecosystem, the company said in a statement. The 15W MagDart charger is only 3.9mm, 26.4 per cent thinner than the MagSafe Charger, but it is still faster than MagSafe due to its Separated Coil & Board design, the company said.

Meet the #MagDart crew in motion!

realme's first concept phone, realme Flash, features a 4500mAh battery capacity and can support up to 50W of MagDart wireless charging, which can charge the battery from 0 to 100 per cent in less than an hour, nearly the same as realme 50W SuperDart wired charger.

The 50W MagDart charger features an active air cooling system that keeps the mainboard and coil temperatures at a reasonable level with a compact and powerful fan. The company said that it can quickly remove heat by drawing a large airflow into the charger so that it can maintain the charging power at a high level for a longer time. There is a MagDart power bank and a special charging base. The two can be paired together to become a vertical charging station.

(The above story first appeared on LatestLY on Aug 04, 2021 10:10 AM IST. For more news and updates on politics, world, sports, entertainment and lifestyle, log on to our website latestly.com).