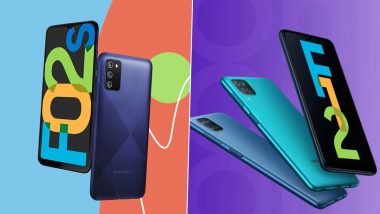 The South Korean tech giant Samsung on Monday officially introduced two budget smartphones under its affordable F-series in India. The Galaxy F02s and Galaxy F12 handsets appear to be rebranded models of Galaxy M02s and Galaxy M12, respectively, at least in terms of specs. Interestingly, both the handsets get a waterdrop-style display. However, the former gets a triple rear camera while the latter flaunts quad cameras at the back. The Galaxy F12 also supports a 90Hz refresh rate for an advanced viewing experience. Samsung Galaxy M42 5G Spotted on Geekbench, India Launch Imminent. 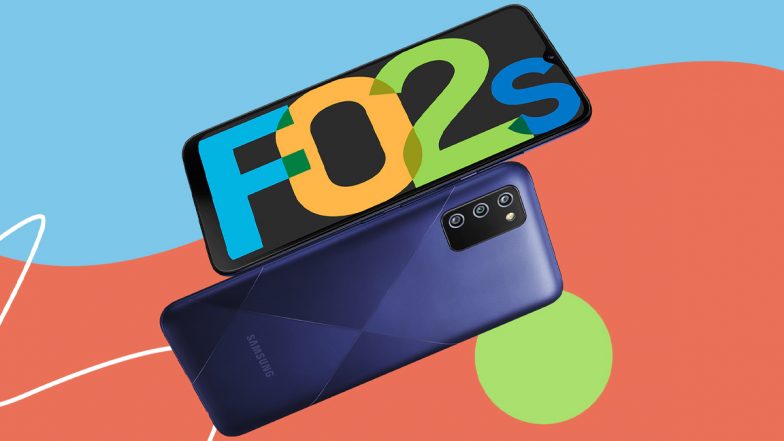 Talking about availability, the Samsung Galaxy F02s will be made available for sale on April 9 at 12 pm IST. On the other hand, the Galaxy F12 will go on sale on April 12 at noon. Both phones will be sold online exclusively via Flipkart and Samsung.com.

Specification-wise, the Samsung Galaxy F02s sports a 6.5-inch HD+ Infinity-V display with a 20:9 aspect ratio and 720x1,600 pixels of resolution. It is powered by an octa-core Qualcomm Snapdragon 450 SoC while mated up to 4GB of RAM and 64GB of internal storage. It gets a triple rear camera module that includes a 13MP primary sensor, 2MP depth sensor, and a 2MP macro lens. Upfront, there is a 5MP snapper for selfies and video calls. It runs on Android 10 with One UI on top. It is backed by a 5,000mAh battery with 15W fast charging.

The #FullOnFab #SamsungF12 launched with a bang! Here’s the tea on all that went down. pic.twitter.com/poJc5bXOHs

The Galaxy F12, on the other hand, comes with a 6.5-inch HD+ Infinity-V display supporting a 90Hz refresh rate. The screen offers an aspect ratio of 20:9 and a resolution of 720x1,600 pixels. It is powered by an octa-core Exynos 850 chipset that is paired with 4GB RAM and up to 128GB of storage.

For photos and videos, the phone comes equipped with a quad rear camera setup housing a 48MP Samsung GM2 primary sensor assisted by a 5MP ultra-wide lens, 2MP macro lens, and a 2MP depth sensor. It also gets an 8MP camera for selfies and video calls. It runs on Android 11-based One UI 3.1 Core. Moreover, it is fuelled by a 6,000mAh battery with a 15W fast charger.

(The above story first appeared on LatestLY on Apr 06, 2021 12:21 AM IST. For more news and updates on politics, world, sports, entertainment and lifestyle, log on to our website latestly.com).