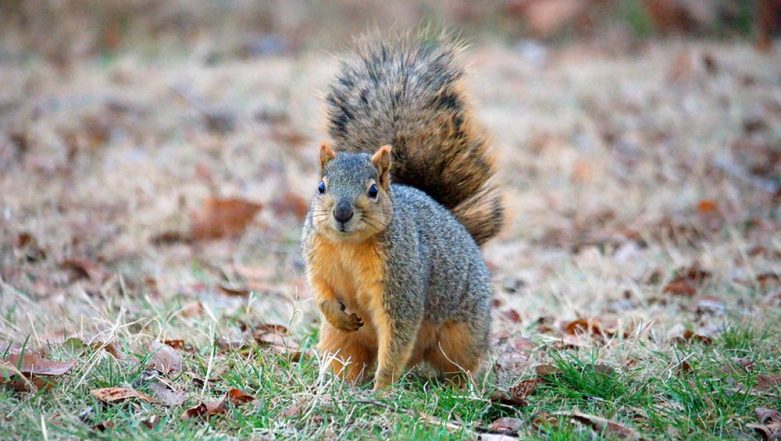 When someone says squirrels you'd think of those small size rodent-like creatures with their bushy tails. Jumping and running across from trees to trees, squirrels make for cute creatures hunting for their nuts more often. But residents in North Carolina can spot some oddity in and around Robeson County. Going by the recent pictures posted by state wildlife officials there are 2-foot tall squirrels in the area. Baby Squirrel Taken into Police Custody After Chasing a Man in Germany.

The photos released are from the camera traps in Robeson County and people on social media also could not, not notice the big size of these squirrels. But the state officials provided more clarity on these species. These are identified as fox squirrels which are about 26 inches tall and weigh around 3 pounds. Also called the eastern fox squirrel, they are the largest of the species and native to North America. Woman in London Calls Cops to Arrest Thief, Turns Out to be a Squirrel.

Well, they sure stand tall, don't they? And that bushy tail looks more magnificent in the picture here. These squirrels are twice the size of common grey squirrels and seen in metropolitan areas like Charlotte and Raleigh, according to the North Carolina Wildlife Commission. Because of their appearance, they may get mistaken for American red squirrels. Some of them can go upto 70 cms in length. They are commonly seen in some provinces of Canada, Colorado. Texas.