Astronomers have discovered a small black hole outside the Milky Way by looking at how it influences the motion of a star in its close vicinity. 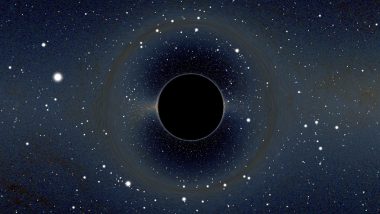 London, November 12: Astronomers have discovered a small black hole outside the Milky Way by looking at how it influences the motion of a star in its close vicinity.

The newly found black hole was spotted lurking in NGC 1850, a cluster of thousands of stars roughly 160,000 light years away in the Large Magellanic Cloud -- a neighbour galaxy of the Milky Way. The detection in NGC 1850 marks the first time a black hole has been found in a young cluster of stars (the cluster is only around 100 million years old, a blink of an eye on astronomical scales).

According to Sara Saracino from the Liverpool John Moores University's Astrophysics Research Institute, the black hole is roughly 11 times as massive as our Sun. Astronomers started on the trail of this black hole due to its gravitational influence on the five-solar-mass star orbiting it.

Previously such small, "stellar-mass" black holes have been spotted in other galaxies by picking up the X-ray glow emitted as they swallow matter, or from the gravitational waves generated as black holes collide with one another or with neutron stars.

However, most stellar-mass black holes don't give away their presence through X-rays or gravitational waves.

This is the first time this detection method has been used to reveal the presence of a black hole outside of our galaxy. The method could be key to unveiling hidden black holes in the Milky Way and nearby galaxies, and to help shed light on how these mysterious objects form and evolve, the team said.

"Every single detection we make will be important for our future understanding of stellar clusters and the black holes in them," said co-author Mark Gieles from the University of Barcelona, Spain.

(The above story first appeared on LatestLY on Nov 12, 2021 04:12 PM IST. For more news and updates on politics, world, sports, entertainment and lifestyle, log on to our website latestly.com).