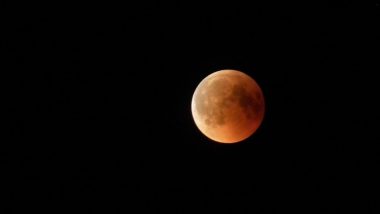 The full moon of June called the Strawberry Moon will appear in the skies on June 6, 2020. And it will coincide with the penumbral lunar eclipse June 2020 which is expected to occur on June 5, 2020. While you may imagine a pink-coloured moon, it has nothing to do with its shade. Meanwhile, the second lunar eclipse of 2020 will be visible in most parts of Europe, Asia, Australia, Africa, South/East South America, Pacific, Atlantic, Indian Ocean, and Antarctica. As Strawberry Moon 2020 approaches, we have brought to you some interesting facts about the celestial event and its various names. Strawberry Moon 2020 Date and Time: From The Meaning to Its Formation, Know Everything About Full Moon of June.

It is also said that the name of the Moon comes from the colour of the full Moon at this time of year. The orbit of the Moon is in the same plane as the orbit of the Earth around the Sun. Around summer solstice when the sun is at the highest point in the sky, the moon shines through the atmosphere. According to NASA, it gives the full Moon a reddish or rose colour, like the sun during sunset.

(The above story first appeared on LatestLY on Jun 03, 2020 03:00 PM IST. For more news and updates on politics, world, sports, entertainment and lifestyle, log on to our website latestly.com).