Xiaomi India is all set to launch the new Redmi Note 7 and Redmi Note 7 Pro smartphones today in India. Watch the live streaming of the launch event here. 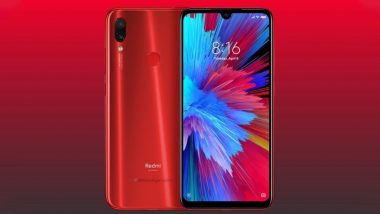 Xiaomi's sub-brand Redmi will be launching the new Note 7 smartphone in the country today. The phone maker is also expected to launch Redmi Note 7 Pro alongside the Note 7 at an event in New Delhi. The launch event is scheduled to commence at 12 PM IST onwards and the company will be broadcasting the event live on its YouTube channel. Moreover, Samsung is also scheduled to launch the three smartphones under the new ‘Galaxy A’ Series today. Coming to Note 7, the phone was launched in the China market last month. Samsung To Launch New Galaxy A50, Galaxy A30 & Galaxy A10 Smartphones Today; Watch LIVE Streaming of New Galaxy A Series Event.

The new Redmi Note 7 from Xiaomi will sport a 6.3-inch FHD+ display with resolution of 1080x2340 pixels and Corning Gorilla Glass 5 protection. The phone will be powerered by Qualcomm Snapdragon 660 chipset that will coupled with up to 6GB of RAM and 64GB of internal storage. In the camera department, Xiaomi Redmi Note 7 will be equipped with a dual rear camera module comprising of a 48MP Samsung GM1 lens with f/1.8 aperture and a 5MP secondary shooter. The front camera on the smartphone will be a 13MP shooter for selfie and video calling. Xiaomi To Launch Redmi Note 7 in India on February 28; To Feature 48MP Camera & Snapdragon 660 SoC.

The connectivity options on the smartphone will be carried out by 4G VoLTE, Wi-Fi 802.11ac, Bluetooth v5.0, GPS/ A-GPS and USB Type-C port. The phone will also get 3.5mm headphone jack and rear mounted fingerprint sensor. The phone will be fuelled by a 4,000mAh battery along with a Quick Charge 4.

(The above story first appeared on LatestLY on Feb 28, 2019 11:29 AM IST. For more news and updates on politics, world, sports, entertainment and lifestyle, log on to our website latestly.com).