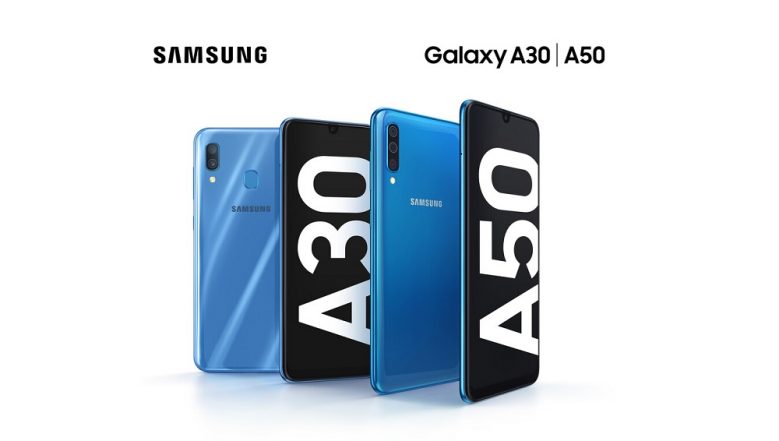 Samsung Mobile India will be officially introducing new Galaxy A Series smartphones in Indian market today. The Korean smartphone maker is expected to launch atleast three mid-tier premium looking devices at an event in Mumbai today. The launch event is scheduled to commence at 12 PM IST onwards. We previously reported that Samsung will introduce Galaxy A50, Galaxy A30 and Galaxy A10 handsets. Moreover, Xiaomi is also launching its new Redmi Note 7 smartphone at an event in Delhi. Samsung Galaxy M30 Smartphone With Triple Camera & 5000 mAh Battery Launched; Price in India Starts From Rs 14,999.

The Korean phone maker will be broadcasting the launch event of new Galaxy A series smartphones on its official social media handles - Facebook and Twitter. The company is also expected to live stream the event on its official YouTube channel.

Talking about Galaxy A10, the base variant of Galaxy A10 will sport a 6.2-inch HD+ resolution with a waterdrop notch. The phone will be packed with an octa-core chipset mated with a 3GB of RAM and 32GB of internal storage. For photography, there will be a single 13MP rear camera along with an 8MP selfie shooter. The new phone will run on new Samsung UI based on Android 9 Pie OS. Samsung Galaxy Fold vs Huawei Mate X; Expected Prices, Specifications, Features & Sale Date: War of Foldable Phones.

The bigger Galaxy A30 phone will get a 6.4-inch sAMOLED display with waterdrop notch offering FHD+ resolution. Unlike Galaxy A10, the new Galaxy A30 will sport dual rear cameras comprising a 16MP primary camera & 5MP super wide angle lens as seen on Galaxy M20. To be fueled with a 4000 mAh battery, the device will also support 15W fast charging. New Samsung Galaxy A50 India Price Leaked Ahead of Tomorrow’s Launch; Galaxy A10 Render Images Surface Online.

Samsung Galaxy A50 will be the most advanced device in the new Galaxy A Series that will carry in-display fingerprint sensor. Similar to Galaxy A30, the new Galaxy A50 gets 6.4-inch sAMOLED display with Infinity-U notch. Coming to the photography department, the new Galaxy A50 will feature a 25MP primary camera, an 8MP ultra-wide angle lens, and a 5MP depth sensor. For carrying out the daily functionality, the phone is packed with a 4000 mAh battery with 15W fast charging support.