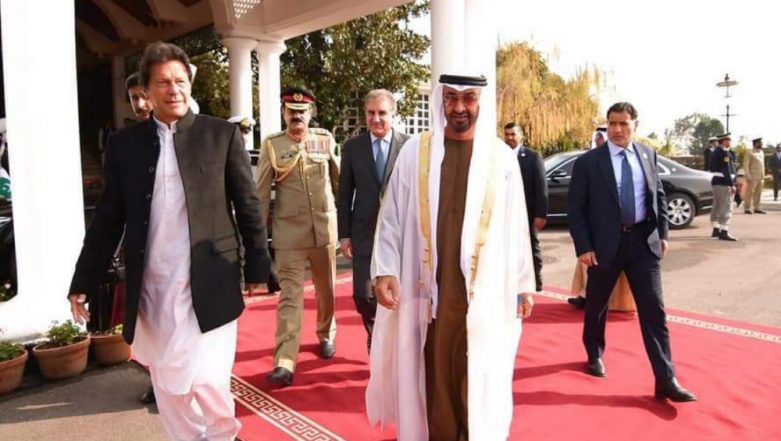 The Crown Prince, who is on a day-long visit to the country after nearly 12 years, was received by Khan upon his arrival at Nur Khan airbase in Rawalpindi, Dawn reported.

He was given a guard of honour and a fly-past during the red carpet welcome.

The high-level delegation will hold talks with the Pakistani side after the two leader's one-on-one meeting.

Pakistan's Foreign Office said the visit is aimed at building on the fresh momentum in ties injected by recent contacts at the leadership level. Khan visited the UAE twice since August to seek economic assistance to ward off the country's foreign exchange crisis.

Pakistan and the UAE last week finalised the terms and conditions of a USD 6.2 billion support package for Islamabad, which the crown prince is expected to announce during his visit, the report said, adding that the package is to help Islamabad address its balance of payment crisis.

The report quoted a cabinet member as saying that the UAE package is exactly the same size and has the same terms and conditions as those given by Saudi Arabia.

With the new package, Pakistan will save a total of about USD 7.9 billion on oil and gas imports from the UAE, accounting for over 60 per cent of the annual oil import bill amounting to roughly USD 12 to 13 billion, the news report said.

This includes about USD 3.2 billion each of oil supplies on deferred payments from the UAE and Saudi Arabia and about USD 1.5 billion trade finance from the International Islamic Trade Finance Corporation (ITFC), it said.

The total financing support from the UAE and Saudi Arabia, including the ITFC's trade finance, is to be around USD 13.9 to 14 billion when cash deposits of USD 3 billion each from the two countries are also included, according to the cabinet member.

Additionally, a deep-conversion oil refinery is to be set up by Parco — a joint venture of Pakistan and Abu Dhabi — worth USD 5 to 6 billion at Khalifa Point and an expected petro-chemical complex by Saudi Arabia at Gwadar Oil City.

The Pakistani government has also started backchannel discussions with Qatar for some relief in terms of reduction in LNG prices or a relaxed payment schedule. Last month, the UAE said it will soon give USD 3 billion to Islamabad.

Pakistan's all weather ally China has also pledged to provide a generous aid to Islamabad to overcome its financial woes. Beijing has not yet revealed the quantum of its financial support.

Pakistan is negotiating a USD 8 billion bailout package from the International Monetary Fund (IMF) to overcome a severe balance-of-payments crisis that threatens to cripple the country's economy.

Pakistan apprehends the IMF will come with stringent conditions of austerity besides scrutiny of USD 60 billion China-Pakistan Economic Corridor projects whose terms till now remained confidential. The Trump administration is making all efforts to ensure that any IMF loan to Pakistan is not used to repay its Chinese debt.