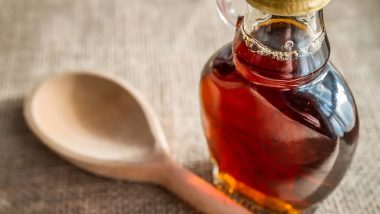 Ottawa, December 7: Canada is facing a shortage of maple syrup due to shortened harvest. The Quebec Maple Syrup Producers (QMSP) has reportedly released half of its emergency reserves, amounting to 22 million kg. Notably, it is for the first time in three years that Canada used the emergency reserve of maple syrup. Canada's Quebec province produces almost one-third of the world's maple syrup.

"That's why the reserve is made, to never miss maple syrup. And we won't miss maple syrup," reported US Public Radio quoting. According to a report published in BBC, this year, 183m kg of maple syrup was produced in the world, out of which 60 million kg came from Quebec's forests. One of Country's Largest Sugar Maples Removed for Safety.

The syrup is produced by tapping Maple sap directly from sugar maple trees. It was then boiled to concentrate into maple syrup. The entire process is dependent on weather. Notably, Maple saps can only be tapped when the temperature is above freezing point during the day and below freezing point at night.

The drop in the production of maple syrup this time is due to a shorter and warmer season this year. As per the QMSP, global sales jumped by over 36 percent this year as compared to the previous one. Reportedly, In 2019 a barrel of maple syrup cost almost 1,900 Canadian dollars.

(The above story first appeared on LatestLY on Dec 07, 2021 12:08 PM IST. For more news and updates on politics, world, sports, entertainment and lifestyle, log on to our website latestly.com).