He said the two neighbours "must make sure that our relationship moves forward on the right track, bring more benefits to our peoples and make greater contribution to the region and the world." 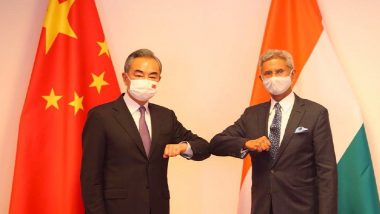 Beijing, March 7: China and India have encountered "some setbacks" in the bilateral relations in recent years, Chinese Foreign Minister Wang Yi said on Monday as he called for managing their differences over the boundary issue through equal footing consultations for a "fair and equitable" settlement.

Addressing his annual press conference on the sidelines of the Chinese parliament, Wang also said that some forces have always sought to stoke tensions between China and India, in an apparent reference to the US.

"China and India relations have encountered some setbacks in recent years which do not serve the fundamental interests of the two countries and the two peoples," Wang said in response to a question asked by PTI on the boundary issue and ties between the two neighbours. China Willing to Mediate in Ukraine Crisis: Foreign Minister Wang Yi.

"As regards the boundary question, it is left over from history. China has all along advocated managing differences through equal footing consultation and actively seeking a fair and equitable settlement and meanwhile not letting it affect or interfere with bigger picture of bilateral cooperation,” he said.

China and India should be "partners rather than rivals", said Wang, who is also the State Councilor.

Last month, External Affairs Minister S Jaishankar said that India's relationship with China is right now going through a "very difficult phase" after Beijing violated agreements not to bring military forces to the border. Speaking at a panel discussion at the Munich Security Conference (MSC) 2022 in Germany, Jaishankar had said that India was having a problem with China along the Line of Actual Control (LAC).

Wang said some forces have always sought to stoke tension between China and India and division between regions. “Their attempts have put more and more thoughtful people in reflection and on alert,” he said.

"More and more people have come to realise that for China and India, both major countries with a population of over one billion, only by staying independent can we firmly grasp our own destiny and realise our goals of development and rejuvenation,” Wang said.

Noting that China and India have a combined population of over 2.8 billion and account for one-third of humanity, and when the two countries active stability and prosperity and living in peace and harmony, global peace and prosperity will have a solid foundation, he said.

"As an Indian proverb goes, help your own brother's boat across and your own will reach the shore. We hope that India will work with China to uphold the strategic consensus that our two countries pose no threat, offer development opportunities to each other and continue to build mutual trust, avoid misunderstanding and miscalculation so that we will be partners for mutual success instead of adversaries of mutual attrition,” he said.

He said the two neighbours "must make sure that our relationship moves forward on the right track, bring more benefits to our peoples and make greater contribution to the region and the world."

He said the US' Indo-Pacific strategy is becoming a byword for bloc politics. "It professes a desire for international cooperation, but in reality it is stoking regional rivalry. It talks about multilateralism but in reality creates exclusive clubs. It claims international rules but in reality is setting and imposing rules suiting itself and its acolytes,” he said.

The eastern Ladakh border standoff between the Indian and Chinese militaries erupted following a violent clash in the Pangong lake areas and both sides gradually enhanced their deployment by rushing in tens of thousands of soldiers as well as heavy weaponry. The tension escalated following a deadly clash in the Galwan Valley on June 15, 2020.

As a result of a series of military and diplomatic talks, the two sides completed the disengagement process in Gogra as well as in the north and south banks of the Pangong lake last year. Russian Bank Working to Issue China's UnionPay, Domestic MIR Cards After Visa, Mastercard Exit.

India and China held the 14th round of Corps Commander-level meeting on January 12 during which the two sides agreed to maintain dialogue through military and diplomatic channels to work out a "mutually acceptable resolution" of the remaining issues of the standoff at eastern Ladakh.

China has described as “positive and constructive” the latest round of military-level talks with India and said Beijing will work closely with New Delhi to "properly handle" the border issue, even as it refuted the US allegation of “intimidating” neighbours.