A 90-year-old Hong Kong woman was duped of USD 32 million (HK$ 250 million) by fraudsters posing as Chinese officials. It is said to be the biggest recorded phone scam. After receiving the complaint last month, the police started an investigation into the matter. 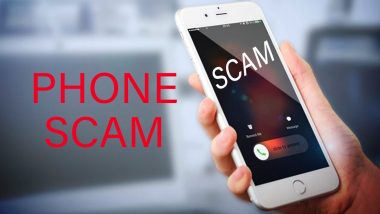 Hong Kong, April 21: A 90-year-old Hong Kong woman was duped of USD 32 million (HK$ 250 million) by fraudsters posing as Chinese officials. It is said to be the biggest recorded phone scam. After receiving the complaint last month, the police started an investigation into the matter and even arrested a 19-year-old boy in connection with the case. Fake Loan App Scam: Mumbai Police Arrests 4 for Duping People through Fake Lending Apps.

The authorities even froze bank accounts having HK$ nine million. However, fraudsters used the rest of the money. The woman received the first call from the fraudsters in July last year. The man claimed to be a law enforcement officer from China. She was reportedly told that her name was used in a serious criminal case in China and was asked to transfer the money to designated bank accounts to investigate whether the cash was the proceeds of crime, reported South China Morning Post. Fake 'Free iPhone' Schemes to Gift Cards, Has This Startup Conned Many Indians? Twitteratti Wonder If There's a Big Scam There!

The woman was promised to give her money back. According to the report, 11 transactions amounting to HK$ 250 million were made by the 90-year-old woman between August 2020 and January 2021. The student reportedly went to the woman’s home on Plunkett’s Road on The Peak in July 2020 and gave her a mobile phone to communicate with the fraudster. One of the fraudsters even accompanied the women to a band for making one of the 11 transactions.

When the woman realised that it was a scam, she filed a police complaint. Kowloon East regional crime unit is handling the case. In a similar case, a 65-year-old woman was also duped of HK$ 68.9 million in October last year by phone scammers. Three men were arrested in connection with this crime. The incidents of phone scams increased by 18 percent in Hong Kong in the first quarter of 2021 as compared to the first quarter of the last year.

(The above story first appeared on LatestLY on Apr 21, 2021 01:04 PM IST. For more news and updates on politics, world, sports, entertainment and lifestyle, log on to our website latestly.com).