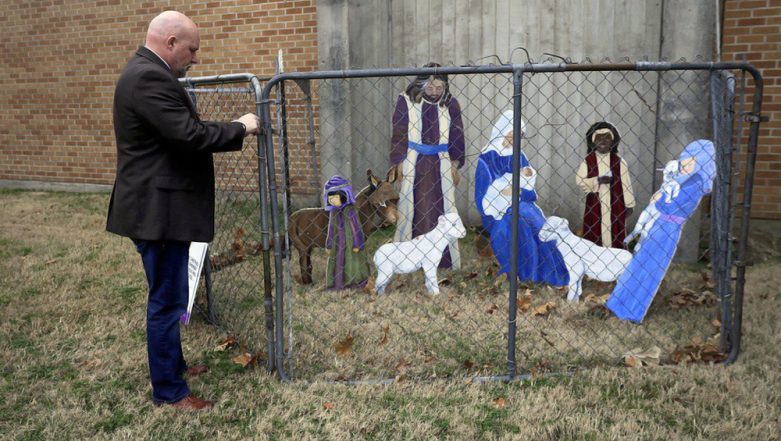 As Christmas arrives, churches everywhere prep up to mark the birth of Jesus Christ. The Nativity scene is displayed in all the churches and it is decorated with lights for the onset of the festival. A church in Oklahoma decided to do something different, yet important, with their decorations for Christmas 2018. They put up a fence around the Nativity scene. The message read, "The Holy Family was a Migrant Family." The fence around the scene had created some confusion among the visitors, hence they put up the board. The idea was to highlight the situations that the migrants were facing in the US. It was a message to US President Donald Trump on his migration policies.

Pastor Chris Moore explained why they put up a fence around Christ's birth. "We've put up a fence this year as a response, maybe a provocative response, to what is an immigration crisis right now," he was quoted to a report. They wanted people to remember how the holy family had sought asylum in Egypt after the birth of Jesus. The holy family fled the oppression and thus migrated to Egypt. The message the church wanted to give across was "what if the same policies we have in his country existed in Egypt at the time? Would they have found themselves locked way? Would they have found themselves behind a fence?"

Check The Picture of Oklahoma Church's Nativity Scene in a Fence

Earlier this year, Donald Trump revised the policies of immigration, which left a lot of migrant families in despair. His 'zero-tolerance' immigration policy resulted in separating many families and children from their parents. In the months of April and May, over 2000 children were separated from their parents and it was said that they will have to fight their own cases in the court. Heartbreaking Video From US Immigration Court: Toddlers and Children Are Forced to Attend Deportation Proceedings Without Lawyers.

The fence around represents the scene that was seen at the borders this year. The church wanted to give a moral voice to their decorations and said at least we can aim to be better then we are now. The Pastor also said that the church does not get involved in political matters but it could play an important role sometimes.
Comments
Tags:
American President Donald Trump Christmas Christmas 2018 Christmas 2018 Decorations Donald Trump Donald Trump administration Illegal immigrants Immigrant Families Immigration Crisis immigration policies Nativity scene Oklahoma Oklahoma City Tulsa US Immigrants US immigration law US Immigration policy
Comments
You might also like