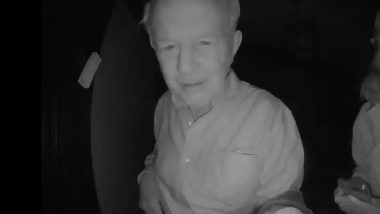 California, October 12: Paul R Milgrom and Robert B Wilson on Monday won the Nobel Prize in Economic Sciences 2020 for improvements to auction theory and inventions of new auction formats. Generally, the Nobel Prize Committee calls the winners before announcing the names. However, the Nobel Committee could not reach Paul Milgrom as it was middle of the night in California, United States.

The fellow prize winner and Milgrom's neighbour Robert Wilson walked over to Milgrom's house. To inform him that he had won the Nobel Prize in Economics. In the CCTV camera outside Milgrom's house, Wilson could be seen ringing his doorbell and knocking several times at 2:15 am. Finally, Milgrom responded. Nobel Prize in Economic Sciences 2020 Winners: Paul R Milgrom and Robert B Wilson Awarded the Honour for Improvements to Auction Theory.

The #NobelPrize committee couldn't reach Paul Milgrom to share the news that he won, so his fellow winner and neighbor Robert Wilson knocked on his door in the middle of the night. pic.twitter.com/MvhxZcgutZ

Wilson told Migrom about him winning the Nobel Prize. From the other side of the door, Milgrom responded, "Yeah, I have? Wow". Wilson's wife Mary then added that if he would answer his phone. According to Stanford University, when Wilson rang Milgrom's doorbell at 2:15 in the morning, Milgrom's wife, who was in Stockholm, received a security-camera notification on her phone. She then watched live as Wilson told Milgrom he had won the Nobel Prize. Nobel Peace Prize 2020 Winner: World Food Programme Receives The Honour For Combating Hunger.

The duo was awarded the honour as their theoretical discoveries have improved auctions in practice. This year's Laureates, Milgrom and Wilson, studied how auctions work. They also used their insights to design new auction formats for goods and services that are difficult to sell in a traditional way, such as radio frequencies. Their discoveries benefitted sellers, buyers and taxpayers around the world.

(The above story first appeared on LatestLY on Oct 13, 2020 09:00 AM IST. For more news and updates on politics, world, sports, entertainment and lifestyle, log on to our website latestly.com).