Saudi Arabia: Executions Drop to 27 After Laws Changed in 2020

The AP previously reported that Saudi Arabia last year also ordered an end to the death penalty for crimes committed by minors and ordered judges to end the controversial practice of public flogging, replacing it with jail time, fines or community service. 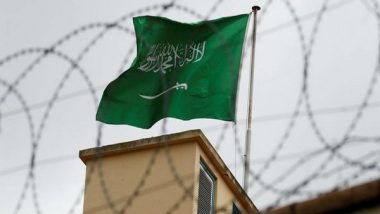 Dubai, January 18: Saudi Arabia, for years one of the world's most prolific executioners, dramatically reduced the number of people put to death last year, following changes halting executions for non-violent drug-related crimes, according to the government's tally and independent observers.

The Saudi government's Human Rights Commission said Monday it documented 27 executions in 2020. That's compared to an all-time high of 184 executions the year before as documented by Amnesty International and Human Rights Watch. The change represents an 85 per cent reduction in the number of people put to death last year. compared to 2019. Saudi Arabia Seeks Death Penalty against Female Human Rights Activist.

"The sharp decrease was brought about in part by a moratorium on death penalties for drug-related offenses,” the Saudi rights commission said. When asked by The Associated Press, the commission said the new law ordering a stop to such executions came into effect sometime last year. The new directive for judges does not appear to have been published publicly and it was not immediately clear whether the law was changed by royal decree, as is typically the case.

The AP previously reported that Saudi Arabia last year also ordered an end to the death penalty for crimes committed by minors and ordered judges to end the controversial practice of public flogging, replacing it with jail time, fines or community service.

The force behind these changes is 34-year-old Crown Prince Mohammed bin Salman, who has the backing of his father, King Salman. In an effort to modernize the country, attract foreign investment and revamp the economy, the prince has spearheaded a range of reforms curtailing the power of ultraconservative Wahhabis, who adhere to a strict interpretation of Islam that many Saudis still practice.

For years, the kingdom's high rate of executions was in large part due to the number of people executed for non-lethal offenses, which judges had wide discretion to rule on, particularly for drug-related crimes.

Among those put to death that year by Saudi Arabia were 32 minority Shiites convicted on terrorism charges related to their participation in anti-government protests and clashes with police. While some crimes, such as premeditated murder, can carry fixed punishments under the Saudi interpretation of Islamic law, or Shariah, drug-related offenses are considered “ta'zir,” meaning neither the crime nor the punishment is defined in Islam.

The kingdom has long been criticized by independent rights groups for applying the death sentence for non-violent crimes related to drug trafficking.

Many of those executed for such crimes were often poor Yemenis or low-level drug smugglers of South Asia descent, with the latter having little to no knowledge of Arabic and unable to understand or read the charges against them in court.

Saudi Arabia carries out executions mainly by beheading and sometimes in public. The kingdom had argued that public executions and those of drug traffickers serve as a deterrent to combat crime.

In a statement obtained by the AP, he said the change represents a sign the Saudi justice system is focusing more on rehabilitation and prevention rather than solely on punishment.

According to Human Rights Watch, there were just five executions for drug-related crimes last year in Saudi Arabia, all in January 2020. Human Rights Watch Deputy Middle East Director Adam Coogle said the decrease in executions is a positive sign, but that the Saudi authorities must also address “the country's horribly unfair and biased criminal justice system that hands down these sentences.”

“As authorities announce reforms, Saudi prosecutors are still seeking the death penalty for high-profile detainees for nothing more than their peaceful ideas and political affiliations,” he said. “Saudi Arabia must immediately end all executions and death sentences for non-violent crimes.”