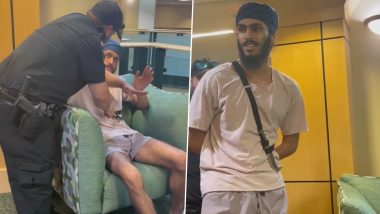 The Sikh student who was detained with the Kirpan. (Photo credits: Twitter)

Mumbai, September 25: On Thursday, a major controversy broke out when a Sikh student of the University of North Carolina at Charlotte was allegedly detained on campus for wearing a Kirpan. As per the Sikh traditions, the Kirpan is one of the integral parts of the five Sikh Kakars. After the incident came to light, Bharatiya Janata Party leader Manjinder Singh Sirsa shared a video where the US police can be seen trying to take the Kirpan from the Sikh youth. Later, the police detained him when he resisted.

After the incident led to an uproar across the globe, Sharon Gaber, University chancellor Sharon Gaber apologised for the incident and the campus police officer's action. In a statement, Gaber said, "UNC Charlotte dispatch received a 911 call reporting someone with a knife in the building. Police officers responded to the scene and engaged the individual in question. During this interaction, the individual was placed in handcuffs while officers took possession of the object. The handcuffs were removed after the object was retrieved."

Despite numerous global campaigns to create awareness about Sikh Kakaars, it’s disheartening to see the Campus Police at University of North Carolina detain a Sikh youth for his Kirpan. I condemn the discriminatory attitude of University authorities towards Sikh students. @UNC pic.twitter.com/10UkIZ3WT8

She further added, "Further investigation showed the item was a kirpan, an article of faith in Sikhism." Gaber also said that "state law and University policy prohibit the possession of a knife or other edged instruments on campus". She also said that they are committed to ensuring that the incident doesn't happen again.

I wasn’t going to post this, but I don’t think I will receive any support from @unccharlotte . I was told someone called 911 and reported me, and I got cuffed for “resisting” because I refused to let the officer take my kirpan out of the miyaan. @CLTNinerNews pic.twitter.com/Vk9b0Tspvm

BJP leader Sirsa not only shared the video but also demanded an apology from the University. Condemning the incident, Sirsa said, "Despite numerous global campaigns to create awareness about Sikh Kakaars, it's disheartening to see the Campus Police at University of North Carolina detain a Sikh youth for his Kirpan."

(The above story first appeared on LatestLY on Sep 25, 2022 04:25 PM IST. For more news and updates on politics, world, sports, entertainment and lifestyle, log on to our website latestly.com).