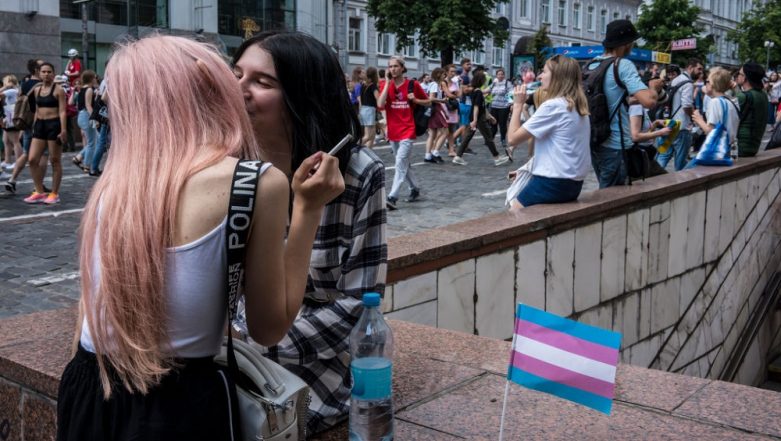 Kiev, June 23: More than 8,000 people turned out on Sunday for Kiev's annual Gay Pride parade amid tight security as far-right activists sought to disrupt the celebration, organisers said. Waving rainbow and Ukrainian flags, dressed in bright colours, marched they marched through the centre of the capital as thousands of police and National Guards stood by to ensure order. "We go out to show that there are a lot of us and we have a lot of support," Ruslana Panukhnyk, director of the NGO KyivPride that organizes the parade, told AFP.

"Because democratic values, human rights values are not empty words for a very large number of Ukrainians," she added. Vitaliy, now a 27-year-old man, was attacked with glass bottles after the parade in 2015. He admits that "it was scary" to participate in parade the very next year, but now, he believes, "Ukraine has made a big step forward" in terms of security. Myanmar Holds First LGBT Boat Pride Parade! Rainbow-Coloured Boats With Revellers Sail in Yangon City.

Some 1,000 far-right and Orthodox activists, who were kept away from the march, held up anti-gay banners and shouted "Shame!" as the procession began. "Today we feel our vocation -- to protect traditional values, to show that we uphold morality," said 21-year-old Semen Sokha, an opponent of the parade. "Me and many of my brothers would not want our children to be gay or lesbian," he added.

For the first time, several dozen Ukrainian soldiers and veterans of war with Russia-backed rebels in the east walked in a separate column -- some in military uniform. Ukrainian police said they had detained nine far-right activists who prepared provocations.

KyivPride activists had invited the new Ukrainian President Volodymyr Zelensky to join the parade. "Unfortunately, there was no reaction from the President," Panukhnyk said.

Ukraine, which ousted a pro-Kremlin regime in a pro-Western uprising in 2014, hopes to become a member of the European Union as it seeks to overcome widespread poverty and corruption. But homophobia is still commonplace, even though Kiev authorities have allowed gay pride marches to be held, unlike in neighbouring Russia.

The procession is the first "March of Equality" to take place since Zelensky, a comedian without previous political experience, took over as president in May. Turnout at the event was higher than last year, when around 5,000 people took part.

Attacks and harassment against gays and other minorities are fairly common in Ukraine and global rights groups have previously slammed "an atmosphere of total impunity" for the culprits in the Western-backed nation.