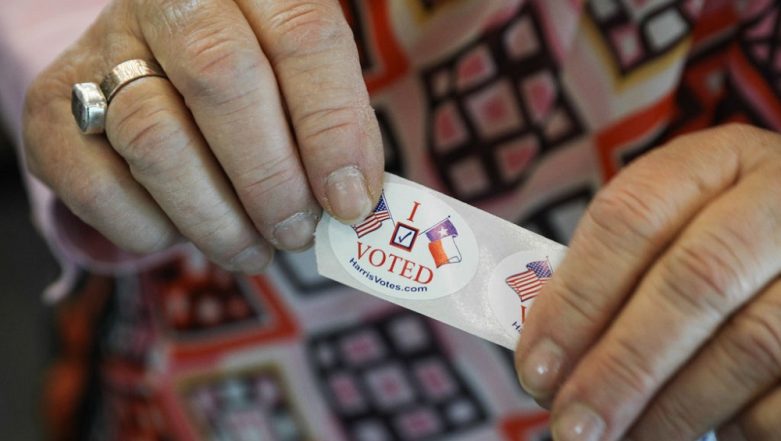 A voter in the US exercising her right to franchise | (Photo credits: Getty Images)

Washington, November 7: As Americans voted in this year's crucial midterm elections, Democrats were making progress in their bid to take the House of Representatives, but Republicans were looking well-positioned to keep the Senate with key races still tight.

All 50 states and Washington D.C. went to the polls on Tuesday as Republicans and Democrats battle for control of the two houses of Congress, with experts saying that voter turnout could be the highest for a midterm election in 50 years, CNN reported.

Americans were voting for all 435 seats in the House of Representatives and 35 of 100 seats in the Senate - the two bodies that make up Congress. Governors are also being chosen in 36 out of 50 states.

If Republicans maintain their hold on both the Senate and the House of Representatives, they could help President Donald Trump press on with his agenda. US Midterm Elections: Is This Election A Referendum on Donald Trump’s Time in Office?

But if the Democrats win 23 seats to regain their majority in the House, they could stymie or even reverse Trump's plans. Democrats claimed the first two of the net 23 seats they need for a House majority, according to CNN projections.

Jennifer Wexton, who got a campaign visit from former President Barack Obama on Monday, is set to defeat Republican Barbara Comstock for her seat in Virginia.

Florida is living up to its history as a cliffhanger state, with Democratic Senator Bill Nelson hoping late votes in Democratic counties could narrow his slim deficit to his challenger, the outgoing Governor Rick Scott.

Democratic gubernatorial candidate Andrew Gillum is narrowly trailing his challenger Republican Ron DeSantis. In Texas, Democrat Beto O'Rourke and incumbent Senator Ted Cruz are neck-and-neck as votes were being counted in the state.

But incumbent Democrat Senator Joe Donnelly was trailing his Republican challenger in Indiana with more than half the votes counted. The Democrats need to pick up two Senate seats and not lose any to have a majority.

Meanwhile, Trump's approval rating stood at 39 per cent in the latest CNN poll. Trump, who will complete his second year in the White House in January 2019, has campaigned non-stop in the midterm elections, focusing on states where his Republican Party has a chance to pick up seats, especially in the US Senate.

The President has touted his administration's economic policies, which have resulted in strong economic growth, record job creation and low unemployment.