In a blow to Democrats, Republican senators on Tuesday voted against advancing the For the People Act, commonly known as voting rights bill. 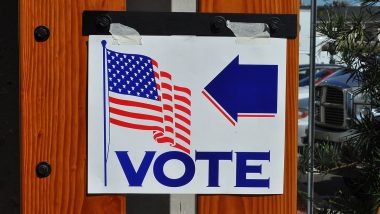 Washington, June 23: In a blow to Democrats, Republican senators on Tuesday voted against advancing the For the People Act, commonly known as voting rights bill. All 50 Republicans in US Senate voted against the For the People Act blocking Democrats' efforts to counter a wave of state-level voting restrictions. The legislation (H.R 1) had also found mention in US President Joe Biden's first speech to the US Congress. It has been passed twice by the House of Representatives.

After the presidential election, Republican-controlled states passed legislation or are in the process of bringing new laws to restrict voting by limiting ballot access and increasing voter ID requirements. To counter this, Democrats want For the People Act and the John Lewis Voting Rights Act to be passed that aim to overhaul federal elections and protect voting rights. Here's everything you need to know about the voting rights in the United States and ongoing efforts to strengthen or weaken it. Democrats Hope a Voting Rights Failure Sparks Change on Senate Filibuster.

A landmark federal legislation, the Voting Rights Act 1965 prohibits racial discrimination in voting. The Senate passed the Voting Rights Act on May 26, 1965. The House passed the legislation with amendment on July 9, 1965. US President Lyndon Johnson signed the bill on August 6, 1965. The Act essentially enforces the voting rights guaranteed by the Fourteenth and Fifteenth Amendments to the United States Constitution and protects the right to vote for racial minorities.

The yet-to-be-passed For the People Act is commonly known as Voting Rights Bill 2021. If passed, the legislation would have, among other things, created a national automatic system for registering voters. In simple words, every American would be automatically registered, reported The Washington Post. In addition, the Voting Rights Bill would set national voting standards, change the composition of the Federal Election Commission, add new restrictions on congressional redistricting, overhaul campaign finance and include new ethics rules for the president and vice president.

Named after late Georgia Representative and voting rights activist John Lewis, the John Lewis Voting Rights Act aims to restore and strengthen parts of the Voting Rights Act of 1965, certain portions of which were struck down by the US Supreme Court in 2013 by Shelby County v. Holder. A previous version of the legislation has been passed by the House in 2019. Meanwhile, the Congressional Black Caucus is drafting a new version to ensure the bill will pass judicial muster if enacted.

One of the major differences between the For the People Act and the John Lewis Voting Rights Act is the former flatly (and retroactively) prohibits "voter-suppression" laws enacted by Republican states, while the latter would simply stop future laws and procedural changes from taking place without pre-clearance from the Department of Justice.

(The above story first appeared on LatestLY on Jun 23, 2021 11:20 AM IST. For more news and updates on politics, world, sports, entertainment and lifestyle, log on to our website latestly.com).