Aquaman 2: Amber Heard’s Agent Reveals The Reason Behind The Actress’ Role Being Reduced In Jason Momoa’s Aquaman And The Lost Kingdom

Amber Heard's agent testified that the star was contracted to make USD 2 million in the Aquaman sequel, which has already concluded filming and is set to hit theatres in March 2023. 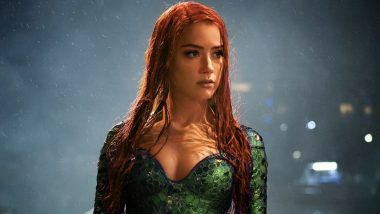 Washington, May 22: Hollywood actor Amber Heard's agent has claimed that the "lack of chemistry" between her and Jason Mamoa was why her role got reduced in Aquaman and the Lost Kingdom. According to Fox News, Heard's agent, Jessica Kovacevic, virtually testified in Johnny Depp's defamation trial on Friday stating the negative light on Heard, due to the ongoing conflicts with Depp, greatly impacted her role. Aquaman 2: Amber Heard Claims Warner Bros Trimmed Her Role In The Jason Momoa-Starrer (Watch Video).

She testified that the star was contracted to make USD 2 million in the Aquaman sequel, which has already concluded filming and is set to hit theatres in March 2023. The agent further claimed that Warner Bros axed Heard's role because there was a "lack of chemistry between her and Jason." She went on to say that Heard received the news of the reduced role as she was reading the script.

On being inquired regarding Heard's harmed career, her agent responded, "In my experience ... Your career takes a turn after something like that. As per Fox News, Kovacevic added that the actor even lost a role with Amazon that was in the works due to the bad press and claimed that, to her knowledge, there were no "performance issues raised" against Heard in the first Aquaman movie. Amber Heard’s Agent Testifies About How the Actress Lost Jobs Because of Her Abuse Allegations Against Johnny Depp.

Amber Heard was first cast in 2017's Justice League film and then made her debut in the Aquaman franchise as Mera the following year.