Britney Spears has sent a legal letter to her younger sister, Jamie Lynn Spears, stating that she won't be bullied with her sister's ill-timed book. 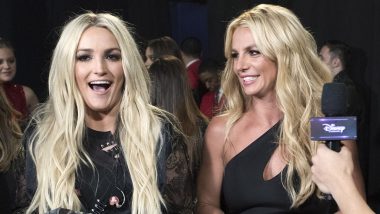 Britney Spears has sent a legal letter to her younger sister, Jamie Lynn Spears, stating that she won't be bullied with her sister's "ill-timed book". The cease and desist letter, sent by the pop star's attorney Mathew Rosengart, comes amid a public back-and-forth on social media between the two sisters that has exploded during Jamie Lynn's media tour for her memoir, 'Things I Should Have Said'. Britney Spears Slams Her Sister Jamie Lynn Spears Over Knife Attack Claims.

"As you know, I represent your sister Britney Spears, and I write at her request concerning the above-referenced matter," Rosengart wrote in the letter, which has been obtained by Variety. "We write with some hesitation because the last thing Britney wants is to bring more attention to your ill-timed book and its misleading or outrageous claims about her." the letter read. Britney Spears Breaks Silence on Sister Jamie Lynn Spears’ Recent Interview.

"Although Britney has not read and does not intend to read your book, she and millions of her fans were shocked to see how you have exploited her for monetary gain. She will not tolerate it, nor should she," the letter continued. The letter references their father, Jamie Spears, who was the singer's conservator for 13 years and is embroiled in a longstanding legal battle with his daughter regarding her conservatorship, which was terminated this past November. The younger Spears sister wrote about her father in her book, discussing his drinking and its impact on her childhood.

"You of all people know the abuse and wrongdoing Britney had to endure during the conservatorship, after initially growing up with a 'ruinous,' alcoholic father. In fact, your own book reportedly states that your father 'spent most of my life in that cycle of ruinous behaviour. His bouts of drinking caused me periods of torment and sorrow,'" the legal letter stated. In a television interview last week with ABC News and on a podcast interview that dropped this week on Spotify's 'Call Her Daddy' with Alex Cooper, the younger Spears discussed the difficulty and pressure of growing up in her famous sister's shadow.

During her interviews, she has commented on her sister's highly-publicised breakup with Justin Timberlake and has discussed an anecdote from her book in which she writes that Britney allegedly locked them in a room with a knife. In response to her press tour, the newly-freed singer has repeatedly posted on social media, mocking her younger sister and criticising her for speaking out when she says she lived a charmed life, while she was working as a world-renowned star bringing in millions of dollars for their family.

"I'm sorry Jamie Lynn, I wasn't strong enough to do what should have been done ... slapped you and Mamma right across your f-king faces !!!!!" the pop star posted on Instagram on Tuesday. The younger Spears sister, who currently stars on Netflix's 'Sweet Magnolias', is a former Nickelodeon child star, who was on 'All That' and had her own TV show, 'Zoey 101', that aired from 2005 through 2008. Her older sibling referenced that show, posting on Instagram, "All I remember saying was 'DAMN!!! How the hell does a 12-year-old land a Nickelodeon show????' ... HMMMMMMMMM."

In the legal letter, Rosengart wrote on his client's behalf, "As I have previously stated, having endured a 13-year conservatorship that stripped her of civil rights and fundamental liberties, Britney will no longer be bullied by her father or anyone else. Britney was the family's breadwinner and she also otherwise supported you. Publicly airing false or fantastical grievances is wrong, especially when designed to sell books. It is also potentially unlawful and defamatory."

Rosengart's letter went on to say, "Michelle Obama famously said, 'When they go low, we go high,' and to Britney's great credit, that is exactly what Britney is going to do, for the time being. You recently reportedly stated that the book was 'not about her.' She takes you at your word and we, therefore, demand that you cease and desist from referencing Britney derogatorily during your promotional campaign. If you fail to do so or defame her, Britney will be forced to consider and take all appropriate legal action."

As per Variety, a source has said that Jamie Lynn, nor her legal team, had received the cease and desist letter by the time they saw it in the press. The letter is dated January 17. In recent days, the former Nickelodeon starlet posted on social media that she and her family are receiving death threats over her sister's "vague and accusatory" posts.