As Mahashivratri is around the corner, it's the best time for devotees to revisit the below-mentioned films that celebrate the magical powers of the diety, also known as Neelkanth. 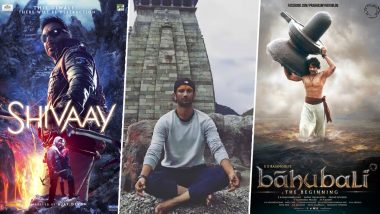 Much like romance and action, religion has also been the subject and backdrop of countless films in Indian cinema. From Mughal-e-Azam (1960), Amar Akbar Anthony (1977), to Oh My God (2012), and PK (2014), several movies have been made with a dash of religion-based themes. And while helming a film with a religious plot, a slew of makers have paid an ode to Lord Shiva in one way or the other over the years. Telangana: TSRTC Decides To Offer Buses on Hire for Devotees Visiting Shiva Temples on Mahashivratri Festival.

As Mahashivratri is around the corner, it's the best time for devotees to revisit the below-mentioned films that celebrate the magical powers of the diety, also known as Neelkanth.

Ajay Devgn-starrer 'Shivaay' is a must watch film for any Shiva devotee as it deals with human elements of the lord. In the movie, Ajay played the character of a mountaineer named Shivaay. With the 2016 released movie, Ajay, who also helmed the project, tried to portray Lord Shiva's imperfections apart from his goodness. " He smokes, drinks 'bhang', when he gets wild he will kill randomly, then he will realise that he has made a mistake, people can fool him also. He is good at heart. When he gets violent he is terrible. This is what humans are. Shiva, I feel is the only God which has all the elements," Ajay had said in one of the interviews. Mahashivratri 2022: Ujjain City in Madhya Pradesh to Light Up with 21 Lakh Diyas on Auspicious Occasion.

The title track of the film 'Bolo Har Har' is also dedicated to Lord Shiva and proved that the movie is indicative of Lord Shiva as the destroyer of all evil.

Interestingly, Ajay is a staunch follower of Lord Shiva in real life as well. Reportedly, he has a big tattoo inked on his chest which is Shiva's face along with the sign of OM.

Thanks to filmmaker Abhishek Kapoor for beautifully showcasing Kedarnath, a religious town in Rudraprayag district of Uttarakhand that became important because of the ancient Kedarnath Temple, which is dedicated to Lord Shiva, via his film. Released in 2018, Kedarnath is set against the backdrop of the Uttarakhand floods that took place in 2013.

The film mainly revolves around Hindu pilgrim Mukku (played by Sara Ali Khan) and a Muslim porter Mansoor (late Sushant Singh Rajput), who fall in love during the trek to Kedarnath. When you serve another human being, then Shiva resides in you -- is one of the important messages that the film delivered. Also, listening to Amit Trivedi's soulful devotional song 'Namo Namo' from the film this Mahashivratri will surely act as a cherry on the cake.

The festival of Mahashivratri helps the devotees learn better about their lord and be closer to him, and interestingly, the superhit film 'Baahubali' is comprised of such factors. For the unversed, in the film, actor Prabhas essays the role of a man named Shiva who grows up to be a great devotee of Lord Shiva. His true devotion displayed on screen when he carried huge Shivalinga on his shoulders. The film also has a song 'Kaun Hai Vo' dedicated to Lord Shiva which plays during the time Prabhas carries the idol of the deity.

Like others, Sooraj Pancholi's 'Satellite Shankar' also has Shiva connect. In the movie, Sooraj can temporarily teleport his fellow jawans to their near and dear ones using a device that has something to do with Lord Shiva. The film was helmed by Irfan Kamal. The year 2022 is extremely special for Lord Shiva's devotees as Ayan Mukerji is coming up with a big-budget film 'Brahmastra' dedicated to none other than the god with a third eye. In the film, Ranbir Kapoor will be seen playing the role of a character named Shiva who has special powers.

The official logo of the upcoming project was unveiled at Ardh Kumbh Mela in Prayagraj on the auspicious occasion of Mahashivratri in 2019. Amitabh Bachchan and Alia Bhatt are also a part of the movie. The list did not stop here. Devotees will also get to see superstar Akshay Kumar playing the role of Lord Shiva in 'Oh My God 2'.

In October last year, Akshay shared two posters of OMG 2, one of which shows him in a look inspired by Lord Shiva. The first poster shows Akshay in blue, with his eyes closed and hair in dreadlocks. Words 'Rakh Vishwas, Tu hai shiv ka das' can be seen written on the poster.

The second poster shows a blue hand, probably of the god, holding the hand of a young boy. So, after worshipping Lord Shiva this Mahashivratri on March 1, don't forget to turn on your TV sets and witness the different traits of the diety in a filmy way. Om Namah Shivay!