Kathak legend Brijmohan Nath Mishra, popularly known as Pandit Birju Maharaj, held onto his classical art with constant devotion. In a world where people get swayed by modern trends, the legendary dancer inspired the entire nation 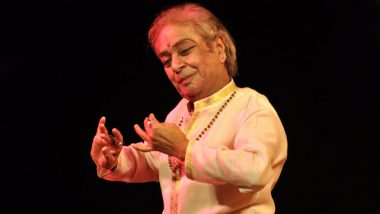 Kathak legend Brijmohan Nath Mishra, popularly known as Pandit Birju Maharaj, held onto his classical art with constant devotion. In a world where people get swayed by modern trends, the legendary dancer inspired the entire nation with his Lucknow Kalka-Bindadin Gharana. India, on Monday, woke up to the grim news of the Kathak maestro's demise. He was 83 when he breathed his last, surrounded by his family at his Delhi residence. RIP Birju Maharaj: President Ram Nath Kovind, Amit Shah and Other Political Fraternity Members Pay Tribute to Kathak Legend.

He passed away after suffering breathlessness. Reportedly, the Kathak exponent had been suffering from a kidney ailment and was under treatment for the past month. Maharaj-ji was born in 1938 to a family of Kathak devotees and performers. He belongs to the iconic Kalka-Bindadin Gharana of Lucknow. Pandit Birju Maharaj Dies at 83: Madhuri Dixit, Hema Malini, Anupam Kher and Other Celebs Mourn the Demise of the Legendary Kathak Dancer.

His grandfather, Bindadin Maharaj, had written and composed around 5000 thumris, bhajans, many of which he had later re-documented from the memory of his mother and other students. His father and teacher Achchan Maharaj, along with uncle Shambhu Maharaj and Lachchu Maharaj were well-known Kathak artists. He learned Kathak under the influence of his three gurus -- his two uncles and his father.

Birju Maharaj lost his father at the young age of nine, but his dedication towards the arts remained intact and his mother acted as a pillar of support.

Pandit-ji took Kathak to a wider audience and took forward the traditions, across generations and gender. While earlier in his family and culture, women were not allowed to dance, Birju Maharaj broke the mould, and provided equal opportunities to his children as well as his students, without any gender bias.

He taught the art to his sons Jaikishan and Dipak and to his daughter Mamta Maharaj, an excellent performer.

He believed in passionately working towards carrying the tradition and the legacy of the art forward. However, he also held firmly to his belief that art should be performed only where it is respected. For his remarkable contribution, the government of India had honoured him with the country's second-highest civilian award, Padma Vibhushan, in 1986. Apart from being at the centre stage of Kathak in the national and global platform, Birju Maharaj has choreographed some of the best Bollywood numbers.

He choreographed songs for Satyajit Ray's 1977 film 'Shatranj Ke Khilari'. He taught Madhuri Dixit the elegance of the classical art in the song 'Kaahe Chhed Mohe' from the 2002 film 'Devdas'. Madhuri collaborated with him once again for the song 'Jagaave Saari Raina' for 'Dedh Ishqiya' (2004). Birju Maharaj made the South superstar Kamal Haasan dance to his steps in the song 'Unnai Kaanadhu Naan' for the film 'Vishwaroopam' (2012).

His most recent Bollywood project was in 'Bajirao Mastani' (2015) in which he choreographed the song 'Mohe Rang Do Lal', featuring Deepika Padukone.

Pandit Birju Maharaj donned several hats during his lifetime. Apart from being a renowned Kathak dancer, he was an equally prolific classical singer, poet and painter. His unique style called the Birju Maharaj style of Kathak that has now seeped into many dance schools and other Gharanas. Apart from being a Padma Vibhushan awardee, the legendary dancer has acquired several titles and accolades.

Birju Maharaj had also opened up his own Kathak academy, named 'Kalashram School of Dance & Music', based in New Delhi. Kalashram focuses on imparting training in the field of Kathak and associated disciplines. Birju Maharaj's death has undoubtedly left a vacuum in the dance and music industry. However, his dedicated students would continue to carry forward his legacy with the wonderful skills and knowledge that he has imparted.