Minari, a semi-autobiographical drama about a family of Korean immigrants trying to realise their American dream in the 1980s, has won the best foreign film Golden Globe following a controversy around the its classification that led the movie to be overlooked in the best picture race. 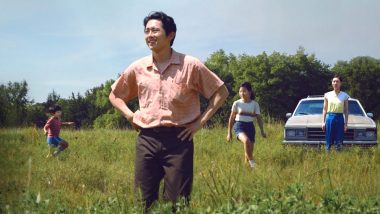 Minari, a semi-autobiographical drama about a family of Korean immigrants trying to realise their American dream in the 1980s, has won the best foreign film Golden Globe following a controversy around the its classification that led the movie to be overlooked in the best picture race. The Hollywood Foreign Press Association (HFPA), the body that conducts the Globes, courted sharp criticism from several personalities, including Lulu Wang, Simu Liu, and Phil Lord after it relegated the Lee Isaac Chung directorial to the foreign-language category given that the film was financed and produced by American companies, A24 and Plan B, respectively. Golden Globes 2021: Nomadland Wins Best Motion Picture – Drama.

The cast, led by "The Walking Dead" alum Steven Yeun, and crew were also majority made up of American talent. Also starring Han Ye-ri, Alan Kim, Noel Kate Cho, Youn Yuh-jung, and Will Patton, "Minari" was only nominated in one category. It really was a family affair for Chung, whose seven-year-old daughter was sitting in his lap, as accepted the award, his first. The filmmaker thanked the "Minari" team, his cousins, his parents, his sister, and his wife, who he said was "hiding". Golden Globes 2021: Chadwick Boseman’s Wife Taylor Simone Ledward Gives A Teary Acceptance Speech After The Late Actor’s Best Actor Win, Says ‘I Don’t Have His Words’ (Watch Video).

"And this one here," he said patting his daughter who went on to hug him tightly, adding "she is the reason I made this film." Chung, who has received rave reviews for the film, also addressed the controversy around its nomination. The second-generation Korean American said "Minari" is about a family that is trying to speak a language of its own. "It goes deeper than any American or foreign language," he added.

"It's a language of the heart and I'm trying to learn it myself and pass it on. I hope a lot of (people) learn how to speak this language of love to each other especially this year. God bless you all and thank you," Chung said as he closed his acceptance speech. As per the rules of the HFPA, the contenders for the best drama or comedy/musical categories must feature at least 50 per cent English dialogues.