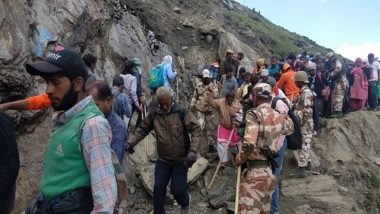 Jammu, July 5: Amid tight security, the six batch of over 6,300 Amarnath pilgrims on Tuesday left for 3,880-meter-high cave shrine of Amarnath in south Kashmir, officials said. A total of 6,351 pilgrims left the Bhagwati Nagar Yatri Niwas here in a convoy of 239 vehicles amid heavy security of CRPF, the officials said.

Till today, over 72,000 pilgrims had offered their prayers at the cave shrine, housing the naturally formed ice-Shivlingam, the officials said. The Yatra is scheduled to end on August 11 on the occasion of Raksha Bandhan.