The services would continue until further announcement, it said in a release. 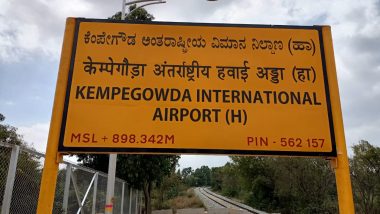 Bengaluru, January 3: Karnataka Chief Minister B S Yediyurappa has said citizens of Bengaluru can take a train to the Kempegowda International Airport, Devanahalli station, from the city beginning January 4.

According to South Western Railway, three pairs of DEMU services would be introduced from Bengaluru area to the Kempegowda International Airport (KIAD) Halt Station from January 4. The services would continue until further announcement, it said in a release. DV Sadananda Gowda, Union Minister and BJP Leader, Collapses Due to Low Blood Sugar, Rushed to Bengaluru Hospital Through Zero Traffic Management.

The railway said besides DEMUs, Bengaluru Cantonment Bangarpet Yesvantpur DEMU train and Yesvantpur Bangarpet KSR Bengaluru DEMU train would also run via KIAD Railway Station with a stoppage at KIAD. Stating that the Bengaluru International Airport Limited and South Western Railway have partnered to establish a railway halt station near Kempegowda International Airport, it said in a tweet that this synergy would lead to hassle- free, quick, environment-friendly travel to the airport and is bound to benefit thousands of commuters daily.