Referring to the latest guidelines issued by the UK government that will come into effect on October 4, another UK official said that London does not have any problem with the Covishield vaccine but there are certain issues related to vaccine certification in India. 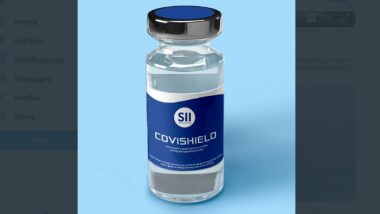 New Delhi, September 22: In the midst of a growing outcry in India over the UK's new travel rules, British officials on Wednesday suggested that the main issue is COVID-19 vaccine certification and not the Covishield vaccine and both sides are moving at "great speed" to resolve the matter.

Following India's strong criticism over the UK's refusal to recognise Covishield, London on Wednesday amended its new guidelines to include the Indian-made version of the AstraZeneca vaccine in its updated international travel advisory.

However, Indian travellers vaccinated with two doses of Covishield will still have to undergo 10 days of quarantine in the UK notwithstanding the amendment, the officials clarified saying the inclusion of the vaccine will not make much of a difference. There is no official reaction by India on the inclusion of Covishield to the approved list of vaccines by the UK. Asked whether Covishield was added to the list because of strong reactions in India, British High Commissioner Alex Ellis said the vaccine is not an issue.

"We listen very carefully to what the Indian government says but ministers have to take decisions and they have been clear that Covishield is not an issue," he told NDTV. Covishield Added as Approved COVID-19 Vaccine in Revised UK Travel Advisory.

On whether the problem is with the vaccine certification, Ellis only said that the UK government is trying to understand how the Indian COVID vaccine app works and that it is a two-way process. He said the UK government is letting India know how its COVID app functions, adding both sides are going through a normal technical process to resolve any issue.

"This is happening at an extraordinary speed," he said National Health Authority CEO RS Sharma, however, said he was not aware of any concerns being raised by the UK about COVID vaccine certification by India, asserting that the Co-WIN system is WHO-compliant.

"I am not aware of any concerns being raised by the UK. The British High Commissioner met me on September 2 and wanted to know details about the Co-WIN system. "So we connected their technical team with our technical teams which had two rounds of discussion with the second one being just yesterday. They have conveyed to us there is no need for any further discussion as all information has been exchanged between the two parties," Sharma told PTI.

According to new rules, Indian travellers who received both doses of the Covishield vaccine produced by the Serum Institute of India will be considered unvaccinated and will have to undergo self-isolation for 10 days. In a strong reaction, India had on Tuesday warned of "reciprocal measures" if the UK does not address its concerns over the new travel rules relating to COVID-19 vaccine certification with Foreign Secretary Harsh Vardhan Shringla describing these norms as "discriminatory".

Referring to the latest guidelines issued by the UK government that will come into effect on October 4, another UK official said that London does not have any problem with the Covishield vaccine but there are certain issues related to vaccine certification in India.

The official said the UK is engaging with the government of India to explore how it could expand its recognition of vaccine certification to people vaccinated by a relevant public health body in India. Quoting new guidelines, the official said Indian travellers to the UK must follow the "non-vaccinated rules" set out by the authorities.

Asked whether the UK had doubts about India's vaccine certification process, the British High Commissioner did not give a direct reply and talked about the new travel policy. "It is a very new policy. It takes a bit of time to work through and what we have learnt in the course of the last 18 months is that what happens in the UK affects India's public health and what happens in India affects the UK's public health because of the fantastic movement of people between the two countries," he said.

The new British rules have triggered massive criticism in India. External Affairs Minister S Jaishankar also took up the issue of Covishield-vaccinated travellers being required to quarantine in the UK with newly-appointed British Foreign Secretary Elizabeth Truss at a meeting in New York on Tuesday. COVID-19 Vaccine Covishield Added to UK Travel Advisory, But Indians to Follow ‘Non-Vaccinated' Rules.

"The UK is committed to opening up international travel again as soon as is practicable and this announcement is a further step to enable people to travel more freely again, in a safe and sustainable way, while protecting public health," a spokesperson in the British High Commission said.

"We are engaging with the Government of India to explore how we could expand UK recognition of vaccine certification to people vaccinated by a relevant public health body in India," the official said.