A case of Nipah virus was registered in Kozhikode in Kerala on Monday, informed Coimbatore district collector GS Sameeran, adding that they are taking all necessary precautions on the border. 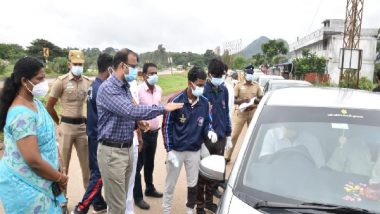 Kozhikode, September 6: A case of Nipah virus was registered in Kozhikode in Kerala on Monday, informed Coimbatore district collector GS Sameeran, adding that they are taking all necessary precautions on the border. "One Nipah virus case had been identified in Kozhikode. The health department has issued some instructions including how to identify Nipah, Zika, or Dengue virus. Patients with high body temperature will have to undergo certain procedures and health check-ups," stated GS Sameeran. Nipah Virus Scare: Tamil Nadu Steps Up Surveillance at Border After 12-Year-Old Boy From Kerala Dies of Nipah.

GS Sameran reviewed the Nipah Virus monitoring camp at Walayar check post. People coming from Kerala to Tamil Nadu have to go through 13 checkpoints. People with negative RT-PCR reports will be permitted to enter the state. Speaking about the procedures taken by the district administration to tackle the upcoming third wave of COVID-19, the Collector, stated, "We do not have to fear any virus. If anyone experiences any symptoms, they should immediately contact the nearest public health centre. We are creating awareness at schools, colleges, and public places. We will avert the third wave of COVID-19."

Earlier, on September 5, the Central government had rushed a medical team to the Kozhikode district of Kerala as the state reported the first death due to the Nipah virus. The team also visited the house of a boy who died of the Nipah virus and collected samples of Rambutan fruits from the nearby vicinity to identify the source of infection. Nipah Virus Scare in Maharashtra: Deadly Virus Found in Bats in Mahableshwar Cave, Know All About the Infection.

According to the World Health Organisation (WHO), Nipah Virus is caused by fruit bats and is potentially fatal to humans as well as animals. Along with respiratory illness, it is also known to cause fever, muscular pain, headache, fever, dizziness, and nausea.

Furthermore, the Centre has advised the locals to follow immediate public health measures including active case search in the family, families, village, and areas with similar topography (especially Malappuram), active contact tracing (for any contacts) during the past 12 days.

The Centre has also called for a strict quarantine of the contacts and isolation of any suspects. Collection and transportation of samples for lab testing.

Earlier in 2018 also, there was a Nipah outbreak in the Kozhikode and Malappuram districts of Kerala.