COVID-19 Surge in India: Over 6.3 Times Increase in Coronavirus Cases in Past 8 Days, Says Health Ministry

India has reported over 6.3 times increase in COVID-19 cases in the last eight days, said the Union Health Ministry on Wednesday. 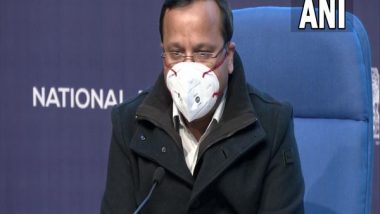 New Delhi, January 5: India has reported over 6.3 times increase in COVID-19 cases in the last eight days, said the Union Health Ministry on Wednesday. "India has reported a more than 6.3 times increase in cases in the last eight days. A sharp increase was seen in case positivity from 0.79 per cent on December 29, 2021 to 5.03 per cent on January 5," Joint Secretary of Health Ministry, Lav Agrawal said during a briefing of the ministry.

"25.2 lakh cases were recorded globally on January 4, the highest ever since the onset of the pandemic. Approximately 65 per cent of cases in the week ending January 4 reported from the USA, UK, France, Italy and Spain," Agrawal added. According to the ministry, 108 deaths have been reported due to the new coronavirus variant Omicron globally, so far.

"Omicron is the predominant circulating strain in the cities in the country, mass gatherings to be avoided to lower the speed of this spread," Dr Balram Bhargava, DG-ICMR said during the briefing.

Meanwhile, in the ongoing vaccination drive for children aged between 15 to 18 years, the ministry informed that a total of 7.40 crore children are between the specified age group and are eligible for COVID-19 vaccination. As per CoWIN portal, 1,37,29,217 children have registered and 1,18,22,818 beneficiaries of this age group had taken their jabs till 4.40 pm.