On the one hand, there are people who engage in nepotism and corruption. On the other hand, NDA is in front of you." 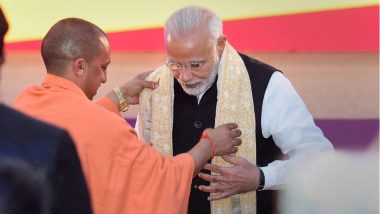 Katihar, November 5: Uttar Pradesh Chief Minister Yogi Adityanath on Wednesday said that Prime Minister Narendra Modi ensured the safety of minorities who were being of tortured in Pakistan, Afghanistan and Bangladesh with the Citizenship Amendment Act (CAA).

"Modi ji has found a solution for infiltration issue... With CAA, he ensured the safety of tortured minorities of Pakistan, Afghanistan and Bangladesh. The Centre also said any infiltrator who tries to breach security of the country will be thrown out," he said while addressing a poll rally here. Also Read | Posters Wishing Success For Kamala Harris Put Up in Her Native Village in Tamil Nadu: Live Breaking News Headlines Updates on November 5, 2020.

In a veiled attack on Mahagathbandhan allies Congress and Rashtriya Janata Dal (RJD), Adityanath said: "This election is important for us because the country is with Prime Minister Narendra Modi to make India a superpower. On the one hand, there are people who engage in nepotism and corruption. On the other hand, NDA is in front of you."

Bihar voted in the second phase of state assembly elections on Tuesday.

Voting in the third phase will take place on November 7 and the counting of votes to be held on November 10.