The global rater said it can downgrade the ratings on the lender in case there is a significant deterioration in its asset quality, which can lead to erosion of profitability and capital, or even if the turnaround of the bank fails because of an aggressive financial strategy and risk management. 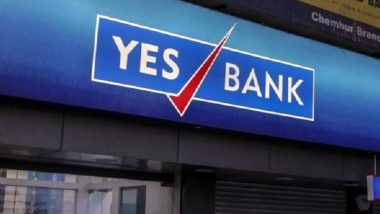 New Delhi, August 4: Moody's on Thursday said it has upgraded Yes Bank's rating while changing outlook to 'stable' on the back of its equity capital raise plan announced last week. The global rating agency has upgraded the private sector lender's long-term foreign currency issuer rating and long-term foreign and local currency back deposit ratings to 'Ba3' from 'B2'.

It has also changed the outlook on Yes Bank's ratings to 'stable' from 'positive' and also adjusted the Baseline Credit Assessment (BCA) to 'b1' from 'b3'. "The upgrade of Yes Bank's BCA and ratings reflects the bank's planned equity capital raise, which will support its credit profile and strengthen its resilience against potential asset quality risks arising from headwinds such as higher inflation and tighter global financial conditions," Moody's Investors Service said in a release.

On July 29, Mumbai-headquartered Yes Bank announced the raising of nearly Rs 8,900 crore (about USD 1.1 billion) through a mix of shares and warrants to be issued to global private equity players Carlyle Group and Advent International. On the rationale behind the ratings upgrade, it said 'stable' rating outlook reflects "Moody's expectation that the bank's credit profile will improve" at a gradual pace. RBI Governor Shaktikanta Das Says ‘50 Basis Points Rate Hike Is the New Normal Across the World’.

It will take time for the bank to establish its competitive strengths, it said.

Under the capital raise plans, each of these two investors will acquire up to a 10 per cent stake in the bank.

On the flip side, Moody's said given the stable outlook, bank's ratings are unlikely to be upgraded over the next 12-18 months. "Nevertheless, Moody's could upgrade the ratings and BCA if the bank establishes a credible and sustainable strategy to improve profitability, without compromising its asset quality and capital."

The global rater said it can downgrade the ratings on the lender in case there is a significant deterioration in its asset quality, which can lead to erosion of profitability and capital, or even if the turnaround of the bank fails because of an aggressive financial strategy and risk management.

"Specifically, a decline in the total common equity to risk weighted assets below 6 per cent and net income/tangible assets below 0.5 per cent will exert negative pressure on the BCA. Any weakening in Yes Bank's funding and liquidity will also be negative," Moody's added. RBI Ups Policy Rate to 5.40% To Contain Inflation.

Yes Bank had to be bailed out in March 2020 following a coordinated action by the government and RBI -- and as many as eight lender led by SBI infused capital worth Rs 10,000 crore into the bank as part of the Yes Bank Ltd Reconstruction Scheme, 2020. The lender has now come out of the Reconstruction Scheme and posted a full year profit in fiscal year ended March 2022.