According to Fox News, the Earl of Wessex and his wife, Sophie Wessex, recently participated in a Q&A with a local news outlet. 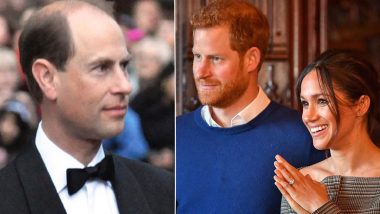 Prince Edward gave quite a witty response when asked about his nephew Prince Harry and Meghan Markle's bombshell interview with Oprah Winfrey that saw the couple put the British royal family on blast. According to Fox News, the Earl of Wessex and his wife, Sophie Wessex, recently participated in a Q&A with a local news outlet, where they were asked whether they watched the Sussexes two-hour sit-down that aired on March 7."Oprah who?" Edward quipped. His wife then followed suit, humorously responding, "Yes, what interview?". Prince Harry Says Supporting Meghan Markle With Mental Health Struggles Taught Him Value of ‘Listening’.

Rather than discuss the family tensions directly, the Earl and Countess of Wessex hinted at the headway the royal family members are making since the CBS special aired. Edward revealed that it was "nice" to have a "lengthy chat" with Harry when the duke traveled to the UK from his home base in California to attend Prince Philip's funeral. During the CBS special, Harry revealed that his relationships with William and their father Prince Charles have ruptured. He detailed how family divisions prompted the couple to step away from royal duties. Prince Harry Reveals How Pregnant Meghan Markle Overcame Her Suicidal Impulses.

Markle described feeling so isolated and miserable inside the royal family that she had suicidal thoughts. The former American actor also said that a member of the family had "concerns" about the color of her unborn child's skin. The family member was not Queen Elizabeth II or Prince Philip, according to Harry, sparking a flurry of speculation about who it could be. The former 'Suits' star also addressed a story that was previously reported, alleging that she made Middleton cry ahead of her May 2018 royal wedding to Harry over a wardrobe disagreement. Markle informed the media mogul that "the reverse happened" but clarified that the disagreement was quickly squashed.

She explained, "It made me cry and it really hurt my feelings. And I thought in the context of everything else that was going on in those days leading to the wedding that it didn't make sense to not be just doing whatever everyone else was doing, which was trying to be supportive." However, Markle noted that the alleged feud that made for such media fodder ended almost as quickly as it began thanks to an apology from Middleton. Thirty-six hours after the comments aired, the palace issued a written statement in the name of the queen, Harry's grandmother.

The statement read, "The whole family is saddened to learn the full extent of how challenging the last few years have been for Harry and Meghan. The issues raised, particularly that of race, are concerning. While some recollections may vary, they are taken very seriously and will be addressed by the family privately." The couple's departure from royal duties began in March 2020 over what they described as the intrusions and racist attitudes of the British media towards the duchess. As per Fox News, the couple now resides in the coastal city of Montecito, California, and they are expecting a baby girl due sometime this summer.