Racist Tweets: After Ollie Robinson, Another England Cricketer Under Scanner for His Alleged Racist Remarks on Social Media, Says Report

According to a report in ESPNcricinfo, Wisden.com published the old tweets from another unnamed cricketer within the current England set-up. 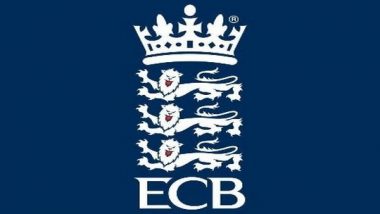 London, June 8: One more cricketer from the England team has come under the scanner for his allegedly racist remarks on Twitter post pacer Ollie Robinson's suspension for similar reason. According to a report in ESPNcricinfo, Wisden.com published the old tweets from another unnamed cricketer within the current England set-up.

The report further states that the cricketer was aged less than 16 at the time he posted the tweets. England and Wales Cricket Board (ECB) has launched an investigation and will make further comments in due course. Ollie Robinson Suspended For Controversial Tweets: A Look At Other Instances When Athletes Got In Trouble For Social Media Posts.

"It has been brought to our attention that an England player has posted historic offensive material on their social media account," ESPNcricinfo quoted an ECB spokesperson as saying. "We are looking into it and will make a further comment in due course," the statement read.

Robinson was on Sunday suspended from all international cricket pending the outcome of a disciplinary investigation following the tweets he posted in 2012 and 2013.

United Kingdom Prime Minister Boris Johnson and Sports Minister Olivier Dowden criticised the ECB for suspending Robinson from international cricket over his tweets which were sent out by him during his teenage days.

"The Prime Minister is supportive of the comments from Oliver Dowden that he made via tweet this morning. As Oliver Dowden set out, these were comments made more than a decade ago [sic] written by someone as a teenager, for which they have rightly apologised," ESPNCricinfo quoted Johnson's official spokesperson as saying.

Earlier, India off-spinner Ravichandran Ashwin also said that he felt genuinely "sorry" for Robinson following his suspension by ECB at the end of the first Test against New Zealand at the Lord's.