England coach Gareth Southgate said Saturday the booing was a “very strange response” and the players will continue taking a knee at Euro 2020. 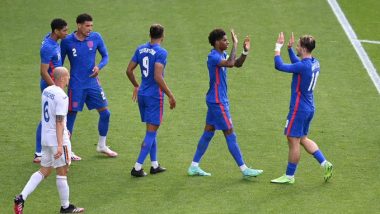 Middlesbrough, June 6: Some England fans booed the team again Sunday for taking a knee before kicking off a warm-up game for the European Championship. The scattered disapproval around the stadium for the anti-racism gesture was quickly countered by other fans applauding the England team, which included six Black players including captain Marcus Rashford.

The scene played out before England faced Romania just as it did Wednesday ahead of a game against Austria at the same stadium in Middlesbrough. England coach Gareth Southgate said Saturday the booing was a “very strange response” and the players will continue taking a knee at Euro 2020.

“We feel more than ever determined to take the knee through this tournament,” Southgate said. “We accept that there might be an adverse reaction and we are just going to ignore that and move forward.” Team Brazil Boycotts Copa America 2021, Casemiro Suggests His Entire Squad is Against the Idea of Hosting Tournament in Brazil.

England will play each of its three group-stage games at Wembley Stadium in London where fans have not been able to watch the national team since 2019, before the COVID-19 pandemic.