Warner has made noticeable progress as he returned to batting but his running between the wickets is still a concern. 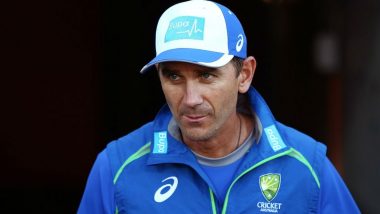 Melbourne, December 27: David Warner's participation remains doubtful for the third Test against India as Australia head coach Justin Langer on Sunday said that the opening batsman is still having some trouble in his groin injury.

Warner was ruled out of the Boxing Day Test as the left-handed batsman was not fully recovered from a groin injury suffered in the ODI series against India.

Warner has made noticeable progress as he returned to batting but his running between the wickets is still a concern.

"There's no-one more professional and he's doing everything possible. We saw him bat the day before the game, he's batting again this afternoon at the MCG, so in terms of his batting he's flying, it's just trying to ... he's still having some trouble with his groin and we know how dynamic he is," Langer told Ricky Ponting during a lunchtime interview on Channel 7. Year Ender 2020: MS Dhoni, Iker Casillas and Other Major Sport Stars Who Announced Retirement.

"His running between the wickets, his movements all the time, so he's getting closer and we're hopeful he will come good, he's certainly hopeful he'll come good, but time will tell. We've still got a few more days to the next Test match," he added.

The third Test between the two sides will be played from January 7 at the Sydney Cricket Ground. Langer feels that the side needs to bring up partnerships in the game to put India under pressure in the ongoing second Test at the Melbourne Cricket Ground (MCG).

"A bit like the first Test, just our partnerships," Langer said when asked what he had been disappointed by. "We're not going to set up games as well as we could - if you look at our partnerships in the first Test match in the first innings and then yesterday, we have to get a lot better at that. ICC Women’s T20I Team of the Decade: Meg Lanning Led Side Comprises of Harmanpreet Kaur, Poonam Yadav & Others (View Post).