According to WUC, in addition to the recognition of crimes against humanity and a serious risk of genocide, today's resolution further cites evidence of the dramatic decline in Uyghur birth rates as a result of mass sterilisation and forced abortions of Uyghur women, as well as the transfer of large numbers of children into state orphanages. 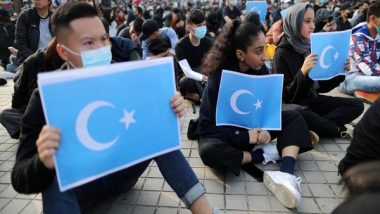 Brussels, June 15: The Belgian Parliament on Tuesday passed a joint motion recognising 'crimes against humanity' and a 'serious risk of genocide' being perpetrated against the Uyghur Muslims in Xinjiang, becoming the sixth parliament to acknowledge the genocide against Uyghurs.

The motion also calls upon the Belgian Government to terminate its bilateral extradition treaty with China and to block the ratification of the now frozen EU-China Comprehensive Agreement on Investment (CAI).

Welcoming the nearly unanimous move, the World Uyghur Congress (WUC) said in a press release that the decision of the Belgian Parliament to recognize the serious risk of a genocide of the Uyghurs is another important step towards widespread recognition of the Uyghur genocide". China Carrying Out 'Slow Genocide' of Uyghurs in Xinjiang: Report.

"It is imperative that other countries in the European Union, as well as the EU institutions themselves, follow suit and take a firm stance against China's atrocities and recognize them for what they are: a genocide," said WUC President Dolkun Isa.

The adopted motion in the Belgian Parliament came shortly after a hearing on the question of an Uyghur genocide was held in the Belgian Parliament's External Affairs Commission. Former camp teacher Qelbinur Sidik described the horrific conditions inside the camps, highlighting systematic rape, torture, sexual abuse, and other forms of severe maltreatment.

WUC's EU Policy Coordinator, Koen Stoop, in his statement, firmly called upon the Belgian Parliament to recognise the Uyghur genocide in light of the available evidence.

According to WUC, in addition to the recognition of crimes against humanity and a serious risk of genocide, today's resolution further cites evidence of the dramatic decline in Uyghur birth rates as a result of mass sterilisation and forced abortions of Uyghur women, as well as the transfer of large numbers of children into state orphanages.

Over the past four months, the Canadian, Dutch, British, Lithuanian, and Czech parliaments adopted motions recognising the Uyghur crisis as genocide. The WUC also extended its heartfelt gratitude to all those in the Belgian Parliament, in particular to Ecolo-Groen MP Samuel Cogolati, who has advocated extensively for the recognition for the Uyghur genocide.

"The WUC will continue calling on the European Union, its member states, and other national governments worldwide to follow the example of the by now five parliaments and recognize the Uyghur genocide," it said in the release.

Earlier, the Czech Senate has voted unanimously on a motion labelling the Chinese government's treatment of Uyghurs Muslim and other ethnic and religious minorities as amounting to "genocide and crimes against humanity".

The motion, approved by 38 votes to 0 last Thursday, noted with concern the "massive violations of human rights and freedoms, genocide and crimes against humanity, ethnic discrimination, and the suppression of cultural, religious and political identity in the PRC," with particular reference to the Xinjiang region.

The supporters of the motion claim that this would require the Belgian Government to act to prevent these abuses in accordance with its obligations under the 1948 Genocide Convention.

Samuel Cogoalati, Belgian MP and Co-Chair of the Inter-Parliamentary Alliance on China said: "The world is slowly waking up to the horrific abuses committed by the Chinese Government against the Uyghurs and other minorities. The Czech vote is further proof of this. Tomorrow the Belgian Parliament has an opportunity to signal to the world that we too will not stand idly by while this suffering continues."

China has been globally rebuked for cracking down on Uyghur Muslims by sending them to mass detention camps, interfering in their religious activities, and sending members of the community to undergo some form of forcible re-education or indoctrination. US Senate Passes Bill to Counter China’s Policy on Reincarnation.

After years of denying the existence of the internment camps in Beijing, China in 2019 described the facilities as residential training centres that provide vocational training for Uyghurs, discourage radicalisation and help protect the country from terrorism.

However, several media reports and former detainees have said that those in the camps are detained against their will and subjected to political indoctrination, routinely face rough treatment at the hands of their overseers and endure poor diets and unhygienic conditions in the often overcrowded facilities.