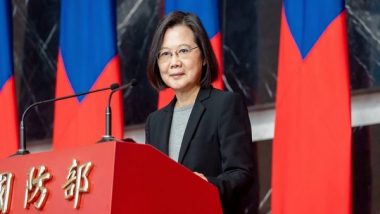 Cross-strait tensions are caused by Taiwan's ruling party "Democratic Progressive Party (DPP) administration's refusal to recognise the 1992 consensus, unchecked plotting for independence and provocations, and collusion with outside forces to fight against the mainland in a bid to change the fact that 'both sides of the Strait belong to one China," Taiwan News quoted Zhu Fenglian, China's Taiwan Affairs Office spokesperson as saying on Saturday.

She responded to the earlier New Year address of Tsai, where the Taiwanese president called on China to resolve their differences peacefully, saying Beijing should curb the spread of "military adventurism."

Tsai strongly protested against China's "military incursions," which she said "are of no benefit to the preservation of regional peace and stability," reported NHK World.

If pro-independence forces "continue to provoke and force us, and even go past the red line, we will have no choice but to take 'decisive measures", said Zhu.

Chinese spokesperson also said that Under the DPP, the Taiwan government "constantly produces lies, hikes up animosity, and sells hatred for political gains," according to Taiwan News.

Beijing is willing to put in the maximum effort to fight for "the peaceful prospect for unification," said Zhu, adding, taking the path with a dead-end that is Taiwan's independence will only push Taiwan into a pit and bring upon the Taiwanese comrades heavy disaster.