Afghanistan: Global Community Concerned Over Resurgence of Terrorism in the Country

A string of bombings across multiple cities in Afghanistan have prompted questions about Taliban claims of providing terror-free administration to the people of the war-torn country, while the global community is concerned about the resurgence of the terrorism in Afghanistan. 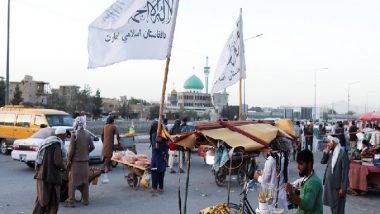 Kabul, April 23: A string of bombings across multiple cities in Afghanistan have prompted questions about Taliban claims of providing terror-free administration to the people of the war-torn country, while the global community is concerned about the resurgence of the terrorism in Afghanistan.

Even as the Taliban regime in Afghanistan has repeatedly claimed victory and assured peace and stability in Afghanistan, string of bombings across multiple cities proves otherwise - suggesting a dim future that lies ahead of roughly 40 million citizens. UN Establishes Formal Ties With Taliban-Governed Afghanistan.

On Friday evening, a blast occurred at the Mawlawi Sekandar Mosque in the Imam Sahib district of Afghanistan's northern province of Kunduz, killing at least 33 people including children and wounding 43. No group has taken responsibility for the latest attack in a series of attacks and bomb blasts that have hit the country since the Taliban takeover of Kabul in August last year.

On Thursday, a bomb explosion ripped through a crowded Shi'ite Muslim mosque in northern Balkh province, killing at least 30 worshipers and wounding 80 others according to preliminary assessments, Khaama Press reported.

The Islamic State - also known as Daesh - claimed responsibility for the attack that occurred during a midday prayer in the Mazar-e-Sharif city of Balk province. The Taliban regime has condemned the recent attacks, including the ones in the capital Kabul and other central provinces, and has repeatedly pledged to counter terrorist groups in Afghanistan, the report said.

The recent spike in terrorism-related incidents has prompted questions about Taliban claims, rising concern among residents, as well as regional countries and the global community at large about the resurgence of the terror threat in Afghanistan.

"...Our country is completely taken out of the quagmire of war," chief spokesman Zabihullah Mujahid had said on September 6 last year, a claim that has repeatedly sought to assure the citizens of a safe living environment, the report said.

On Tuesday, April 19, at least six people, including young students, have been killed and 11 further wounded after three blasts targeted a boy's school in west Kabul's Dasht-e-Barchi neighbourhood, according to local security officials. The blast occurred in a Shia Hazara neighbourhood, triggering fears among residents following a lull in violence over the cold winter months.

The spate of attacks in recent times has drawn worldwide condemnation including from the United Nations, former Afghan politicians as well as human rights groups that have condemned the attacks as 'crimes against humanity'.