Japanese forces conducted a drill at a remote southwestern island in November under the assumption that foreign forces had occupied the Senkaku islands--the Japanese-controlled group of islands claimed by China, according to several government sources. 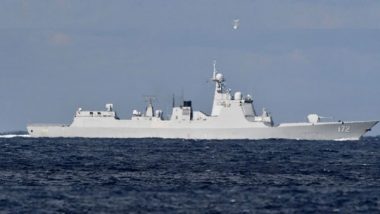 Tokyo, December 28: Japanese forces conducted a drill at a remote southwestern island in November under the assumption that foreign forces had occupied the Senkaku islands--the Japanese-controlled group of islands claimed by China, according to several government sources.

The drill involving the Self-Defense Forces, Japan Coast Guard and police took place at an uninhabited island in Nagasaki Prefecture with land features resembling Uotsuri island. The island is one of the islets that make up the Senkakus in the East China Sea, Kyodo News reported. Also Read | Celebrate New Year's Eve 2021 in New York City: All You Need To Know About the Events That Will Occur on the Streets of NYC!.

Following the two-day drill from November 20 on Tsutara Island in Goto, Nagasaki Prefecture, the government had said the exercise was aimed at improving Japan's response to emergency situations in the country's island areas, and was "not intended for a specific island or a country." China refers to these uninhabited islets as Diaoyu. Also Read | Meghan Markle Receives Front-Page Apology From UK Tabloid After Years of Winning a Legal Battle.

Tensions have escalated in the recent past between Japan and China over Senkaku island amid rising Chinese activities in waters surrounding the islands.

According to the sources, the exercise was aimed at improving the cooperation between organizations including the SDF and the coast guard to prepare for "grey zone" situations that stop short of full-fledged military attacks on Japan.

The government selected Tsutara to hold the drill because its coastal shape and its steep cliffs are similar to the characteristics of Uotsuri, the sources said.

Using helicopters and boats, the participants held landing drills and went over the roles and coordination of different entities, including a remote-island defense unit of the Ground Self-Defense Force, they said.